The RIN data from EMTS are combined with ethanol export data from the US Department of Commerce (DOC) via the USITC DataWeb and biodiesel export data from the Energy Information Administration (EIA) to compare estimated net RIN generation to targeted RFS mandate needs based on EPA’s final rulemaking for 2018.

Table 1 reports gross RIN generation and then makes adjustments for non-compliance and export retirements to arrive at an estimate of net generation across the D-code categories for 2018.  Net generation figures are then compared with the 2018 volumetric mandate levels outlined in EPA’s final rulemaking to estimate a surplus (deficit) for 2018. Generation activity within each D-code category is discussed individually below. 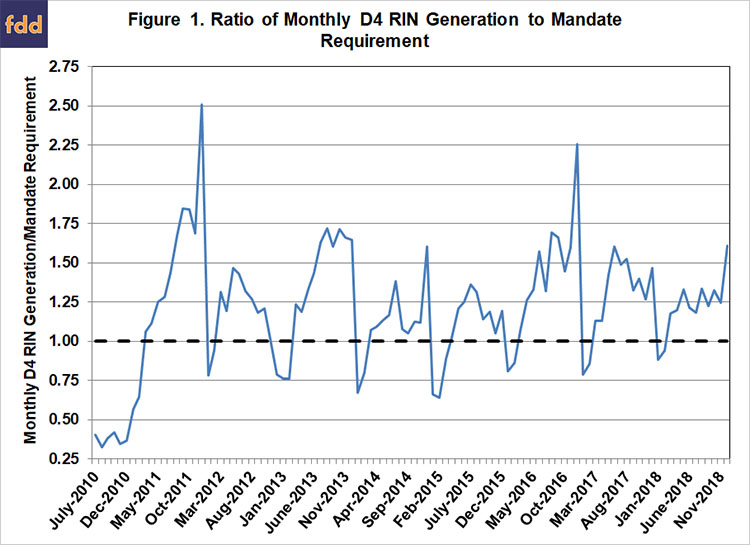 Non-compliance retirements of 2018 D4 RINs are currently at 38.9 million.  Data from EIA suggest a total of 111 million gallons of biodiesel exports, which translates to 166 million RINs. This results in net generation of 3.645 billion RINs or 495 million more than the 3.15 billion RIN (2 billion volumetric) mandate for 2018.

Gross generation of D5 RINs averaged 6.8 million per month over the first and second quarters, strengthened to 17.3 million per month in the third quarter, and increased again to 15.1 million per month in the fourth quarter. More than 168 million D5 RINs were generated in 2018, and after accounting for approximately 600,000 non-compliance retirements, net generation of D5 RINs stands at 167.5 million for 2018. Net generation of D5 RINs falls well short of the undifferentiated advanced mandate gap of 852 million gallons.  The undifferentiated advanced gap represents the difference between the total advanced mandate (4.29 billion RINs), and the biodiesel and cellulosic mandate levels (3.15 billion and 288 million RINs, respectively). Note that this advanced gap can be filled with any advanced RIN category (D3, D4, D5, or D7).

Combining RIN generation and non-compliance retirement data across all advanced categories (D3, D4, D5, and D7), and accounting for biodiesel exports results in net generation of 4.097 billion advanced RINs in 2018. This falls 193 million RINs short of the 2018 total advanced mandate of 4.29 billion RINs. 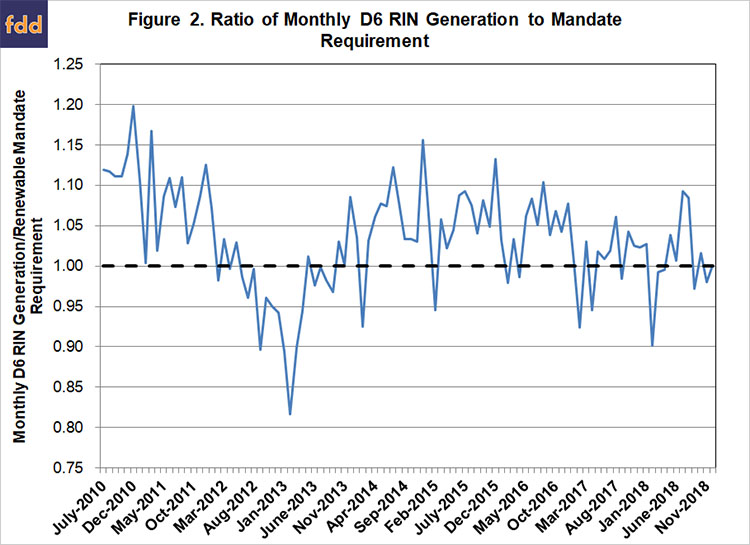 Denatured ethanol exports have averaged over 77 million gallons per month through November. This suggests total denatured ethanol exports will reach 930 million gallons in 2018. Non-compliance retirements of D6 RINs are currently reported at 40.5 million. Thus, net generation of D6 RINs is estimated at 14.07 billion, more than 900 million short of the 15 billion gallon conventional portion of the total mandate for 2018 towards which D6 RINs can be applied for compliance.

Similar to last year, RIN generation data included in the previous quarterly updates during 2018 suggested a deficit relative to RFS mandate levels. Based on all RIN generation, non-compliance retirement, and export data available at this time, net generation did fall more than 1 billion RINs short of the 19.29 billion mandate level for 2018.  This includes a net deficit of 288 million in the advanced categories, and a more than 900 million RIN deficit for the renewable gap towards which D6 RINs can be applied.

Previous RIN stock estimates indicated the potential for more than 1.8 billion in available carryover coming into the 2017 compliance year (see the daily post from November 8, 2017). The estimated deficits for 2017 and 2018 would fully exhaust that level of RIN stocks.  However, smaller refiner exemptions (SMEs) for the 2016 and 2017 compliance periods announced by EPA in September 2018 totaled more than 2.2 billion RINs.  Thus, RIN stocks have likely not been significantly reduced from the estimates leading into 2017. Generation activity in 2018 suggests that the market may expect at least some level of SME request approvals for 2018 as well. 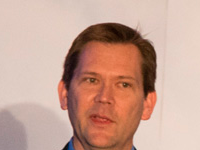