Farmers and landowners had three choices for commodity title programs:

These decisions had to be made by March 15, 2020 for the 2019 and 2020 program years.  By the time decisions had to be made, reasonable estimates of 2019 payments between the three alternatives could be made.  One would expect that farmers and landowners would choose the alternative with the highest expected returns for 2019, though the choice was for both program years.

Figure 1 maps ARC-CO payments for corn base acres for counties in the US. Payments are reported for “non-irrigated” acres for counties with separate ARC-CO programs for irrigation practices, and for “all” acres otherwise.  Payment amounts are adjusted to account for the 85% payment rate for ARC-CO, and are thus given on a per base acre basis. 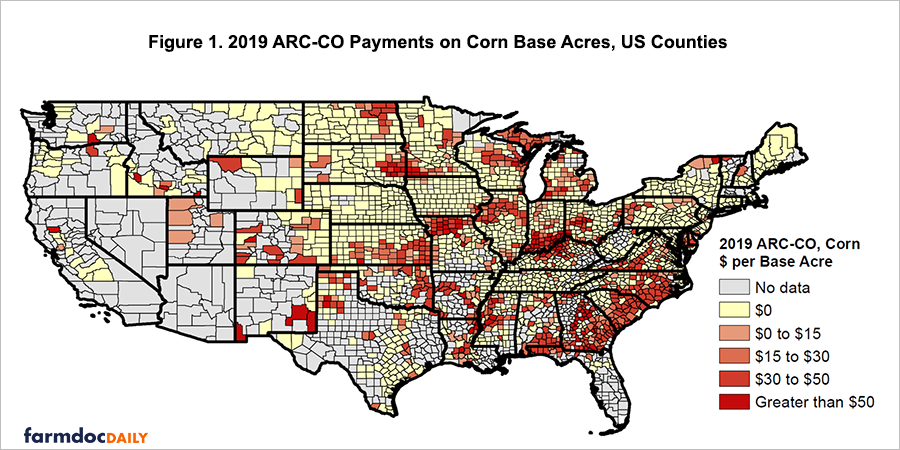 In most corn-producing states at least some counties had 2019 yields low enough to trigger ARC-CO payments for 2019 for “non-irrigated” or “all” practice types. Notable exceptions include Nebraska, and also Iowa where very few counties triggered ARC-CO payments.

Regions of relatively large ARC-CO payments on corn base exist in:

Payments are in the $20 to $35 per base acre range for the majority of counties throughout the Midwest where payments were triggered.  Some Midwestern counties triggered payments exceeding $50 per corn base acre.

Relatively large payments for corn base outside of the corn belt and surrounding states were triggered in parts of the southwestern US, southern Kansas and eastern Oklahoma, and in areas of the southeastern US. 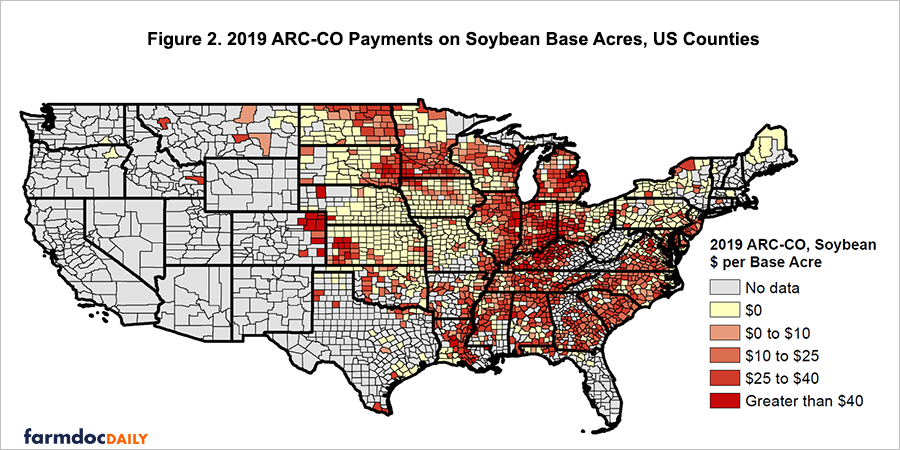 Payments on soybean base are triggered in:

With county yield information being released by FSA, ARC-CO payments can now be computed for the 2019 program year. For corn, ARC-CO payments will be made in some areas of major corn-producing states in the Midwest as well as states in the western and southeastern US.  For soybeans, ARC-CO payments were triggered in a greater number of counties due to the MYA price for soybeans being lower relative to its benchmark as compared to corn. Thus, county soybean yields did not need to be as low, compared with the county benchmark yields, to trigger payments.  The majority of counties in the major soybean producing states of Illinois and Indiana triggered ARC-CO payments for soybeans, while a number of counties in other parts of the US will also receive ARC-CO support for enrolled soybean base.