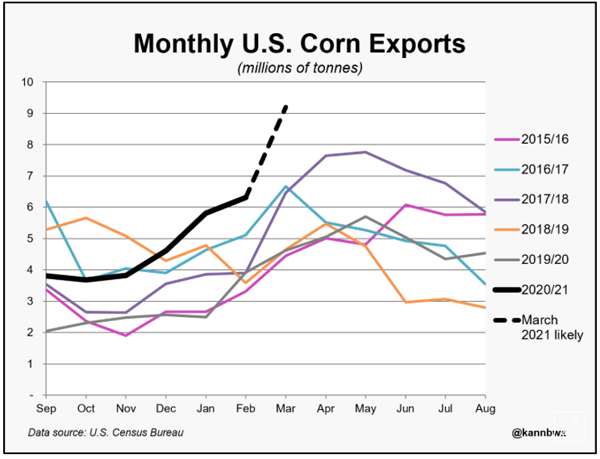 U.S. corn exports in February hit 6.3 million tonnes (248 million bushels) according to official census data published on Wednesday. That tops 2008’s record for the month by 17% and is the largest monthly volume since July 2018.

January corn exports had missed the month’s all-time high by a handful of cargoes, and the December volume was the biggest in 13 years. That marked a much-needed reversal from the average export pace observed in the first quarter of 2020-21 that began on Sept. 1.

Weekly export data suggests that March shipments reached an all-time monthly record by a long shot, likely topping 9 million tonnes. The largest-ever volume is 7.75 million tonnes set in May 2018, and the March high is 6.7 million from 2017.

The U.S. Department of Agriculture sees 2020-21 corn exports at a record 66 million tonnes (2.6 billion bushels), though the agency will have a chance to update that in its monthly report on Friday, and many analysts believe the number must go up.

That expected increase, along with the record annual prediction, is largely driven by unusually strong sales to China. Through March 25, China had booked 23.2 million tonnes of U.S. corn for the 2020-21 year. The prior high for U.S. corn exports to China was 5.15 million in 2011-12.

In the first half of 2020-21, U.S. corn shipments to China reached 7.1 million tonnes, leaving a lot of work for exporters in the second half. However, export inspection data implies that the March volume to China likely topped December 2020’s all-time high of 1.53 million tonnes.

U.S. corn exports last month were not huge just because of China, which is important since nearly two-thirds of all sales on the books are destined for other countries.

China accounted for roughly 19% of all corn inspected for export in March, implying more than 7 million tonnes may have been shipped to other destinations. There are only four other months on record where corn exports to countries other than China topped that mark. Non-China exports were also anomalously high in February.

A strong second quarter means the pressure is not as high on the second half of 2020-21, but stronger volumes are still needed. Assuming March came in at just over 9 million tonnes, corn shipments in the remaining five months would need to average about 5.8 million tonnes each.

Historically, that is very doable as it is far short of 2018’s average of 7 million tonnes for that period. However, if USDA should raise exports to 2.8 billion bushels, for example, that would require a million more tonnes per month between April and August, still below 2018’s record.

Through March 25, U.S. corn sales for 2020-21 totaled 99.5% of USDA’s full-year target, well above typical levels and supportive of analysts’ theory that the agency must raise the forecast.

There are concerns that cancellations or rollovers to the next marketing year could be larger than normal due to the huge level of commitments. It is a bit too early to know how much that might factor in, but it is important to remember that USDA’s projection reflects the expected amount of exports and not necessarily the sales on the books.