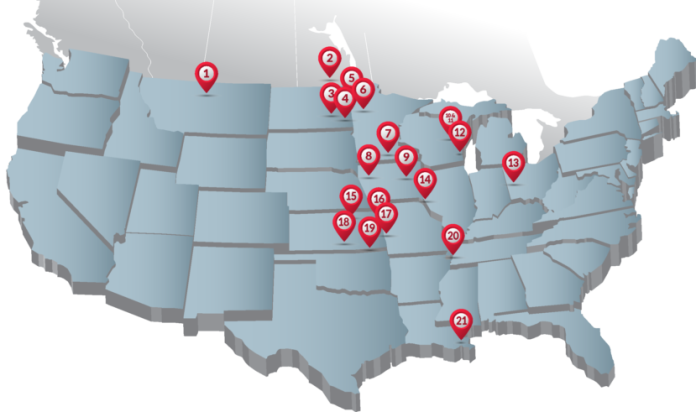 Due to myriad factors, commercial grain facility construction and renovations have been tracking upward for at least two years. The demand for facility upgrades and new construction is not only in response to aging domestic material handling equipment, but also rising demand for co-products like soybean oil.

New and expanding soybean crushing plants comprise more than half of the projects highlighted in Feed & Grain’s construction roundup map this year. Driven by the Biden Administration’s pledge to strengthen climate change policies like the Renewable Fuels Standard, which mandates the level of renewable fuel blended into transportation fuel each year, investment in soybean crushing plants by major players is ramping up to an all-time high.

Read on for a sampling of both greenfield and expanded or upgraded grain storage, shuttle loading, inland terminal, export facility and grain processing projects slated to come online within the next few years.

With 600,000 bushels of storage and rail loading capabilities, the Montana facility will handle Sustainable Oils’ proprietary camelina grain — the feedstock for its Bakersfield, CA, diesel refinery.

The elevator will replace its existing wood crib workhouse with nearly 1.5 million bushels of storage capacity, loading capabilities for 150 cars through a loop track, high-speed receiving and loadout, and a new grain cleaning system.

Facility will feature state-of-the-art automation technology and have the capacity to process 150,000 bushels/day of soybeans.

The jointly-owned processing facility recently broke ground and is expected to crush 42.5 million bushels of soybeans in the first year and create 50 to 60 permanent jobs.

The project will replace one of the mill’s main grain de-hullers with a new de-huller/pearler; more than doubling the plant’s production capacity.

The state-of-the-art shuttle elevator will bring total capacity at the location to 4.55 million bushels of storage and will complement existing CHS grain, agronomy and energy assets.

A $60 million investment in facility renovations and equipment replacements will increase annual refined soybean oil production by more than 35%.

When the plant, built adjacent to the CN Railway, becomes operational, it will crush 38.5 million bushels/year of soybeans or 110,000 bushels/day.

With soybean crushing capabilities of 30 million bushels/year, the plant will produce more than 800,000 tons/year of soybean meal for livestock and create 50 to 60 high-quality jobs.

A new state-of-the-art grain facility will limit supply chain issues caused by the trucking industry by taking advantage of inbound and outbound rail.

The maritime export facility will be one of the first on the Great Lakes-St. Lawrence Seaway system to handle agricultural commodities via truck, rail, and international vessel, including DDGS.

The $25-million upgrade fully aligns the location’s refining capabilities with its crush capacity and allow for greater flexibility in meeting the needs of ADM’s food, biofuel and industrial customers.

With 1.6 million bushels of total storage in two concrete tanks and receiving legs rated at 20,000 bushels/hour, it will serve area producers where the cooperative is decommissioning older storage equipment.

The improvements will more than double its hourly soybean unloading capacity and add automation and safety upgrades.

The new facility will be capable of crushing approximately 39 million bushels/year of soybeans and provide a consistent source of soybean meal, hulls and oil for meal and refined soybean oil.

The facility will be the first of its kind for southeast Missouri, with an annual production capacity of 62 million bushels of soybeans.