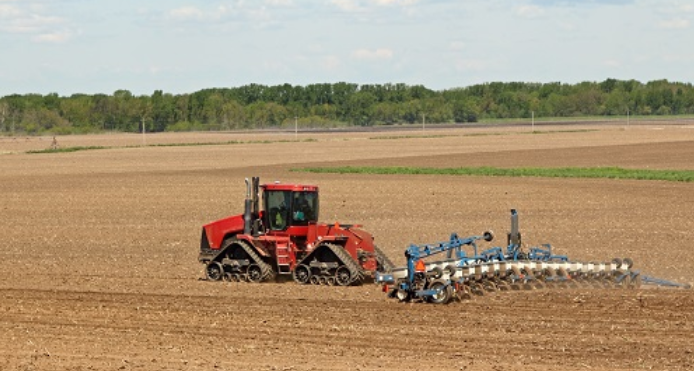 As corn acres shifted higher, so did soybeans. Combined corn and soybean acres have increased by nearly 30 million acres (20%) over the last two decades (figure 2). In the early 2000s, it was common for combined acres to equal 150 million, whereas 180 million acres is common today. When thinking about potential 2020 acreage, we find it helpful to consider two questions:

Or, in other terms, how big is the corn+soybean pie, and what share – or slice- will soybeans represent?

To answer the first question, 180 million acres seems like a reasonable starting point. Combined acres were recently 180.3m (2017) and 178.0m (2018). If you assumed a typical year of prevented planting, combined acreage in 2019 was roughly equal to 179.8m[1]. While acreage of other crops – cotton, spring wheat, etc. – could impact this, winter wheat acres are mostly unchanged. That all said, 180 million is a reasonable starting point.

For 2020, the model in figure 4 suggests nearly 46.9% of combined corn+soybean acres will be planted to soybeans. Or, for a potential 180 million combined acres, an allocation of 95.6 million to corn, 84.4 million to soybeans. 95+ million acres of corn in 2020 would be a lot of corn –the second or third largest crop in recent years. Such an estimate seems almost unfathomable, especially since the price ratio favors soybeans. Further to that point, the price ratio for 2012 and 2013 – when acres last exceeded 95 million – was 2.21 and 2.28, respectively.

Keep in mind that the price ratio in recent years has been historically favorable to soybean.  Levels in 2017 and 2018 (2.57) were the highest observed in the thirteen years of data and were sufficiently high enough to result in roughly equal planting of corn and soybeans (soybeans share of combined acres reached 50%). This is to say that while the price ratio in 2020 favors soybeans, it’s considerably less favorable than what was observed in 2017 and 2018.

To use the pie analogy again, corn acres in 2020 will undoubtedly account for a smaller share of combined acres compared to 2012 and 2013. However, the 2020 pie will be considerably larger, with more acres to allocate.

A lot can – and will – happen between now and the June 2020 planting report. That said, 2020 is facing a unique set of conditions. First, combined acres are likely to remain at or near historical highs of 180 million. Secondly, soybeans are less favorable than in recent years. The combination of factors sets the stage for corn acres to potentially make a run at 95+ million acres. Of course, similar conditions prevailed in 2019, before Mother Nature intervened and dramatically changed the projected ending stocks situation.

You can also click here to visit the archive of articles – hundreds of them – and to browse by topic. We hope you will continue the conversation with us on Twitter and Facebook.