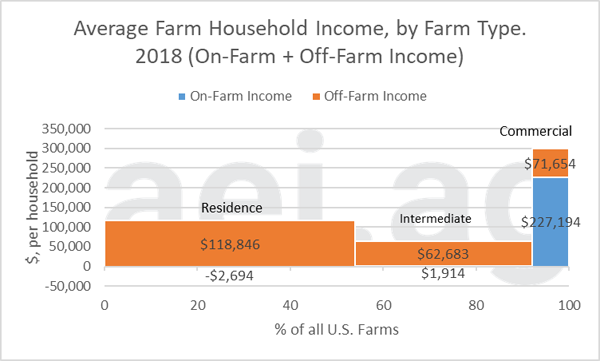 Several weeks ago, we wrote about five macroeconomic factors to monitor in 2020. As one reader pointed out, surging unemployment claims could pose challenges for an already fragile farm economy. This week’s post is a look at off-farm income and potential challenges ahead, specifically the underlying demographics.

Off-Farm vs. On-Farm Income
The USDA has several metrics for segmenting producers. For the issue of off-farm income, we’ve found the typography segments insightful. Specifically, the USDA has three categories:

Commercial farms- This segment is those primarily engaged in farming, and more than $350,000 in gross farm sales. This group is just 8% of operations. On-farm income is much more significant for this segment. Furthermore, off-farm income is still substantial.

Keep in mind that total farm household income is used to meet several obligations, including family living expenses. Furthermore, producers also use the income to satisfy debt service obligations. In other words, the challenge many operations – and farm households- face isn’t being profitable, but profitable enough.

One last note, the demographic situation outlined in figure 1 is why median farm income is not a useful measure of farm financial health.

Distribution of Farm Debt
Using the same segments, the distribution of total farm sector debt is shown in Figure 2. Keep in mind that a majority of farms (nearly 64%) do not have debt.

Overall, there is a significant concentration of farm debt in the commercial segments. Roughly 8% of U.S. farms hold 58% of total farm debt.

Wrapping it Up
Brent always reminds me that debts are not repaid at the sector – or segment- level. While these data can be insightful, they provide no insights as to what’s going on for any individual farm.

When thinking about on-farm vs. off-farm income, the first things to keep in mind are demographic. The USDA reports that – on average- that nearly 92% of farms are heavily dependent on off-farm income to meet their household obligations, including family living and servicing debt. Furthermore, while total farm sector debt is heavily concentrated at the commercial segment, 42% of total farm debt is held by those dependent on off-farm income (residence and intermediate farms).

In Part 2, we’ll consider trends in off-farm income and the potential implications of rising unemployment rates on the already fragile farm economy.

Ag Companies Listed In The Fortune 500