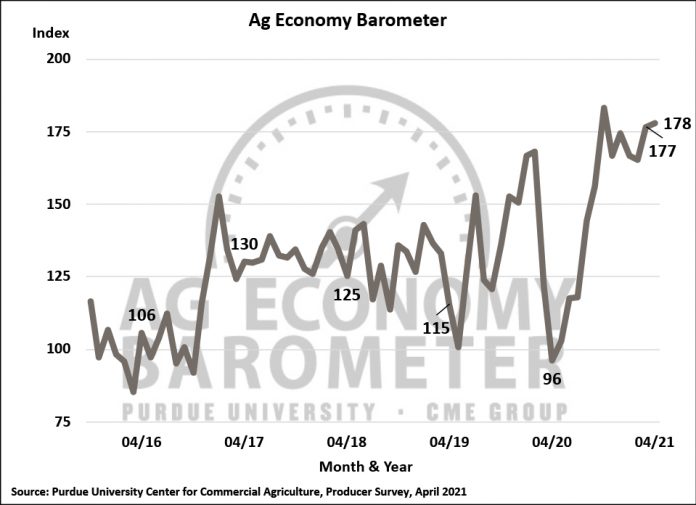 The April reading of the Ag Economy Barometer was 178, virtually unchanged from a month earlier when the index stood at 177 and just 5 points below its all-time high of 183, which was set back in October. Compared to March, however, there was a small change in producers’ perspective on the ag economy as they became more optimistic about the future, while their appraisal of the current situation waned. In April, the Index of Future Expectations rose 5 points to 169, whereas the Index of Current Conditions moved down 7 points to 195. Both of the barometer’s sub-indices remain historically strong, with the Index of Current Conditions just 3% below its all-time high and the Index of Future Expectations reaching its second-highest reading since the survey’s inception in fall 2015. The Ag Economy Barometer sentiment index is calculated each month from 400 U.S. agricultural producers’ responses to a telephone survey. This month’s survey was conducted from April 19-23, 2021.

Somewhat surprisingly, given expectations for strong financial performance, the Farm Capital Investment Index declined 13 points in April compared to March, leaving the index at 75. This month’s decline leaves the index just slightly ahead of where it was before the pandemic got underway in winter 2020 when it stood at 72. The investment index is based upon a question that asks producers if now is a good time or a bad time to make large investments in things like buildings and equipment. However, when asked more specifically about their plans concerning farm machinery purchases, farmers’ optimism was still evident. Compared to March, more producers this month said they plan to increase their machinery purchases and fewer farmers said they plan to hold their future purchases unchanged from a year earlier. The difference in responses to these two investment questions could be reflective of both the run-up in costs and difficulty in scheduling construction projects across the U.S.

Farmers expect the rise in farmland values to continue unabated over the next year as the Short-Run Farmland Value Expectations Index rose to a record high reading of 159, 11 points higher than a month earlier. This month’s reading stands in sharp contrast to a year ago when the short-run index bottomed out at a reading of 72. Producers were less optimistic, however, when queried about their longer-run (5-year) outlook for farmland values as the Long-Term Farmland Values Expectations Index declined 9 points in April to a reading of 148. The difference in producers’ short vs. long-term expectations could be an indication they are concerned that the rapid rise in farmland values currently underway might not be sustainable over the long run.

Myriad tax policy proposals are currently under consideration by the Biden administration and Congress. To learn more about ag producers’ perspective on tax policy this month’s survey included several questions focused on taxation. Nearly 9 out of 10 (87%) survey respondents said they expect capital gains rates to rise over the next five years. Three-fourths of producers in this month’s survey said they are “very concerned” about the possible elimination of the step-up in cost basis for farmland in inherited estates and just over two-thirds (68%) of respondents said they are “very concerned” about a possible reduction in the estate tax exemption for inherited estates. Perhaps the biggest issue facing farm families is their ability to pass their farm business on to the next generation. When asked if they are concerned that changes in tax policy being considered by Congress will make it more difficult to pass their farm on to the next generation of farmers in their family, 82 percent of producers said they are “very concerned” while an additional 13 percent of respondents said they are “somewhat concerned”, suggesting this issue is on the minds of nearly all ag producers.

Now that COVID vaccinations are widely available across the U.S., attention is shifting to the percentage of the U.S. population that does not plan to get vaccinated. Results from a mid-February 2021 survey conducted by the Pew Research Center indicated that 30 percent of U.S. adults either “probably” or “definitely” would not get the COVID vaccine. A series of polls from Monmouth University conducted in January, March, and April 2021 indicate 21 to 24 percent of U.S. adults will “likely never get the vaccine”. To learn more about commercial ag producers’ vaccination plans and to compare them to the U.S. population at large, we’ve been asking about producers’ vaccination plans going back to October 2020. The percentage of producers planning to get vaccinated as soon as possible rose from just 24 percent last October to 58 percent in January and has been fluctuating between 54 and 60 percent since that time. The percentage of commercial ag producers saying no they do not plan to get vaccinated declined from a high of 37 percent in October to 28 percent in January. Since January, the percentage of agricultural producers saying they do not plan to get vaccinated has ranged from 28 to 32 percent. These results suggest the reluctance to get vaccinated for COVID among U.S. ag producers mirrors that of the larger population of all U.S. adults.

Following a nearly one-year hiatus, more in-person ag field days, workshops, and educational events are being planned for 2021. On both the March and April barometer surveys, we asked producers if they are more or less likely to attend these programs than they were in 2020. Responses were mixed. Two-thirds to just over 70 percent of respondents said they are more likely to attend in-person events this year, but 28 to 35 percent of producers said they are less likely to attend in-person events. For program planners, this implies there is still a need to offer programs in a hybrid or virtual format to reach the broad audience of commercial ag producers.

The Ag Economy Barometer was virtually unchanged in April compared to March, but producers indicated more optimism about the future and a bit less optimism about current conditions than a month earlier. Ag producers continue to report expectations for very strong financial performance on the part of their farms and expect farmland values to continue to rise over the next year. However, producers were a bit less optimistic about the long-term outlook for farmland values, suggesting there might be some concern that recent farmland price rises might not be sustainable. Despite expectations for their farms’ strong financial performance, farmers were less inclined to think now is a good time for large investments in buildings and equipment than they were in March. However, when queried more specifically about their farm machinery investment plans, more producers in April said they planned to increase their farm machinery purchases than in March. Possible changes in U.S. tax policy are on the minds of ag producers. Ninety-five percent of survey respondents are either somewhat or very concerned that changes in tax policy being considered will make it more difficult to pass their farms on to the next generation.