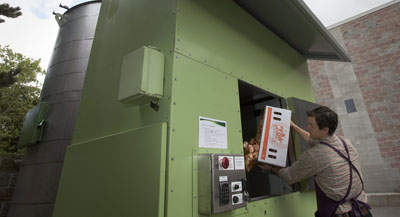 WISErg, a Redmond company that makes fertilizer from food waste, has raised $19.2 million from investors, cash aimed in part at building a production facility in Southern California.

The company, founded in 2009 by former Microsoft employees Larry LaSueur and Jose Lugo, uses a proprietary machine it calls the Harvester to stabilize the nutrients in food scraps before they are collected and processed into fertilizer for crops at the company’s Redmond plant. WISErg then sells the fertilizer to distributors that sell goods to organic farmers.

The latest fundraising round was led by Seattle investment firm Laird Norton and included contributions from Second Avenue Partners. Both firms had previously invested in WISErg. The round brings the company’s total investment haul to $56.6 million, Chief Financial Officer Terri Fujinaga said.

Fujinaga said the latest cash is aimed at funding the construction of a second production facility somewhere in Southern California later this year.

WISErg’s Harvester is a giant, refrigerator-looking device paired with a larger conversion tank. The company gets its raw materials primarily from grocers. Thirteen Harvester units are located in the Northwest at grocery stores like Whole Foods and PCC.

In California, the company has parked a larger model Harvester at an industrial site. The planned plant nearby, Fujinaga said, will “allow us to reach more customers in a cost-effective way. We’re excited.”

She said WISErg had recently signed a deal with Vivid Life Sciences to distribute its fertilizer east of the Rockies.

The company in late 2016 made a CEO change. Co-founder LaSueur was replaced by Brian Valentine, an investor in the company who previously held executive roles at Microsoft and Amazon.

WISErg also had a large round of layoffs in the second half of 2016. The company currently employs 40 people, down from almost 100 in summer 2016. Before the cutbacks, WISErg had planned plants in Oregon and California that year.

“The company, like a lot of startups, got out ahead of its skis with an aggressive sales forecast that didn’t come to pass,” Fujinaga said of the cuts. “We right-sized it.”