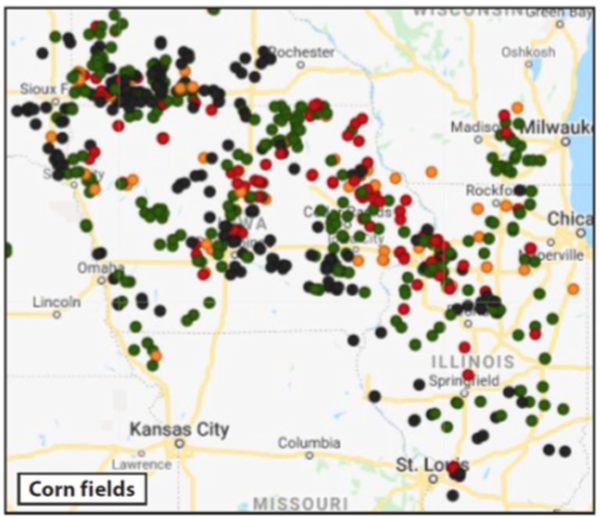 Increased corn rootworm (CRW) pressure is projected to persist in corn crops throughout the Central and Northwest Midwest in 2021. But according to Wyffels Hybrids, growers can take steps to predict the risk of significant rootworm feeding and protect their crops.

To help anticipate CRW pressure, Wyffels initiated a trapping program with its customers seven years ago to ensure they had the information needed to select the appropriate management approach for their farms.

Today Wyffels leads the industry in monitoring more than 877 fields for adult rootworm activity throughout Iowa, Illinois, Minnesota, Wisconsin and South Dakota in 2020.

Highlights from the program:

• Peak beetle activity in continuous corn fields was much more robust than it was in either soybeans or first-year corn. In soybeans, 91% of the fields had very little beetle activity, with 33% of fields never capturing a beetle. In first-year corn fields, 91% had very little activity and 35% had zero beetles. But in continuous corn, 35% of fields were over the threshold for number of beetles per trap per day that would lead to significant damage the following year, according to Iowa State University.

Based on these findings, Heisler and Tharp offered recommendations for 2021.

For first-year corn. Beetle activity in soybean fields was low in many areas this year. In these areas, non-GMO or VT Double Pro hybrids with or without a soil insecticide could be viable options for first year corn fields in 2021. However, with beetle activity higher in parts of Northwestern Illinois, Southwestern Wisconsin, and Northeastern Iowa signifying more risk of rootworm damage next year, growers should be sure to use a soil insecticide with a non- rootworm traited hybrid or plant a SmartStax hybrid.

For continuous corn. Because beetle activity in corn varied and was randomly distributed across Wyffels’ marketing area, Heisler and Tharp do not recommend planting an unprotected hybrid in continuous corn, especially in long-term continuous corn.

They recommend planting a SmartStax hybrid, or a VT Double Pro hybrid with a soil-applied insecticide on second-year corn acres. Fields with multiple years of continuous corn naturally pose a higher risk than a second- year corn planting, so they recommend planting a SmartStax hybrid in fields with three or more years of continuous corn.

Growers who must plant corn in continuous-corn situations in areas with high CRW pressure should consider other management practices like adult beetle control during the growing season. In very high CRW pressure, Heisler and Tharp say, traits alone will not be able to provide adequate protection.

“Resistance has been reported in all current rootworm trait platforms,” Tharp notes, “and soil insecticide will be a necessary tool for continuous corn production. Understanding the risk of corn rootworm damage in your specific fields will help [growers] make the best management decisions to manage risk and maximize profit in 2021,” he says.