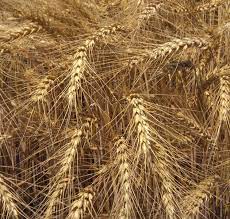 Sam George, farm manager, stands in a field of spelt at the Powell Research and Extension Center. The research into the ancient grains isn’t showing the crop requires lower inputs in the Big Horn Basin’s soils, as was expected.
TRIBUNE PHOTO BY KEVIN KILLOUGH
Posted Friday, August 6, 2021 8:20 am
By Kevin Killough

A few years ago, the Powell Research and Extension Center started researching the potential of growing ancient grains in the Big Horn Basin.

Sometimes called heritage grains, these ancestors — more properly a progenitor — of modern wheat have been cultivated for thousands of years. There are many grains that fall in this category, and there’s some debate over what belongs on the list. For the purposes of the trials, PREC looked into einkorn, emmer and spelt.

As a niche health food, ancient grains tend to fetch a higher price than your standard wheat. They have a higher protein content, as well as vitamins and minerals.

“They’re considered a healthier product than our modern wheat,” said Carrie Eberle, assistant professor of agronomy for the University of Wyoming.

Ancient grains are often found in products at health food markets, such as specialty breads. Sometimes they’re put into farro bowls, which are kind of like a salad made with grains rather than greens.

“They have a different taste to them,” Eberle said.

One of the things PREC is looking at in the research is how the inputs on ancient grains would compare to modern grains.

Since they’ve historically been grown in marginal soils and dry regions, such as the Mediterranean and Fertile Crescent, the expectation was they’d do well in the soils around Powell, with less water and nitrogen. Unfortunately, that doesn’t seem to be the case.

“What we have found is that, when grown side-by-side with modern grains, the modern grains are out-yielding what our ancient grains are doing,” Eberle explained. That’s even with the lower inputs used in the trial.

The hope was that farmers looking to grow a specialty crop could put the ancient grains in their worst soil and, with the higher prices the grains fetch, the producer would still come up with something profitable.

One possible reason ancient grains have lower yields compared to their modern counterparts is that spelt and emmer haven’t been bred as robustly as modern wheat.

Through selective breeding, many crops look considerably different from their ancient counterparts. Ancient bananas, for example, were seedy with very little pulp, and ancient corn looked like the heads of wheat.

“That breeding technology is going to be hard to compete with anything that doesn’t have the same technology,” Eberle said.

Eberle noted that the research is not conclusive at this point. The trials at PREC were done with one single variety and different varieties can produce very different results across regions. Yellowstone winter wheat, for example, is grown in northwest Wyoming, but it’s almost never seen growing down south, where it doesn’t perform as well.

So, a trial with different varieties of the ancient grains might produce different results.

The results illustrate a huge benefit to the research done at PREC. Not all research shows something viable for area producers, who wouldn’t be able to afford the inputs and labor that goes into testing crops. When trials don’t show promising results, PREC can afford to eat the costs.