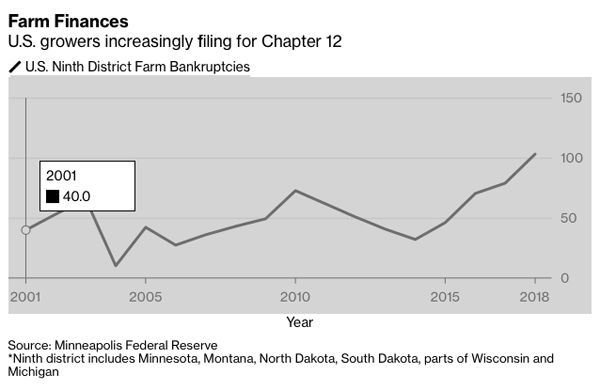 Banks that serve U.S. farmers are increasingly restructuring existing loans and boosting the collateral needed for new ones as the numbers of late and missed payments have risen.

While regional banks are healthy, they’re clearly boosting their defenses against the risks they face. In March, a report by First Midwest Bank in Chicago showed past-due agricultural loans up 287 percent in 2018 over the previous year. Meanwhile, cases handled by the Iowa Mediation Service involving farmers unable to make payments rose 20 percent.

Farmer bankruptcies in six Midwest states rose 30 percent to 103 in 2018, according to the Federal Reserve Bank of Minneapolis. To hold back the tide, Farmers National Bank in Prophetstown, Illinois is restructuring more and more loans to keep growers solvent while trimming the bank’s own risk.

“When you’re a rural community bank, if you’re not involved in agriculture, you probably don’t have a future,” said Don Vogel, the bank’s president and chief executive officer.

Farm loans account for 79 percent of his institution’s portfolio, Vogel said, and involve “probably three generations” of individuals. “It is a long rough patch and it’s probably going to last longer,” he said by telephone. “There’s not one little thing that you can neglect during these times.”

Conditions that prompted lenders to ask for more collateral rose 2.5 percent in the fourth-quarter of 2018 from a year earlier, according to a survey by the Federal Reserve Bank of Kansas City, which covers parts of seven states. Meanwhile, as of January 1, average interest rates on farm operating loans had edged up to 6.07 percent, its highest level since the second quarter of 2010, according to February report by the Federal Reserve Bank of Chicago.

Farmer incomes are down 11 percent since 2010 and expenses are up 31 percent, as crop prices have fallen and a trade war with China has cut demand. Meanwhile, Midwest floods have wiped out some growers, and left others with planting delays and drowned supplies.

Kiley Fleming is the executive director of the Iowa Mediation Service. State law there provides borrowers the option to mediate with creditors before foreclosures can begin, she said. That can mean a resolution that includes selling machinery or restructuring loans.

Longer Days
Her days have gotten considerably longer, she said, but her team has an 80 percent success rate in finding a solution, she said. Some farmers just aren’t in a position to refinance, she said. The alternative — selling equipment — is on the rise, with North American farm tractor inventories jumping 8 percent in the past year to a record high in March.

“Banks are working with their customers, trying to figure out how to keep them going,” said Chris Kalkowski, vice president of agribusiness banking at First National Bank of Omaha. “If you need liquidity, the advice is being given, you’re going to have to create it by doing something. And a lot of the time, that turns out to be selling some assets.”

Collateral needed for farm loans and extensions have increased
Even so, the crisis has become so severe that Fleming said she recently urged Chuck Grassley, an Iowa Republican and the second-highest ranking member of the U.S. Senate, to push through new legislation to aid farmers forced to seek bankruptcy.

Grassley, meanwhile, said he’s already taking steps to help. In March, Grassley and a bipartisan group of senators introduced a bill that would help farmers reorganize by raising the Chapter 12 operating debt cap to $10 million from about $4.2 million, he said in an telephone interview on Tuesday.

“Even if the trade war ends, with this oversupply of corn and soybeans and wheat, we’re still going to have low prices,” Grassley said in an interview. Separately, the U.S. House of Representatives’ Agriculture Committee plans to hold a hearing on May 9 to review the rough Farm Belt economy.

So far this year, personal income for farmers is down 25 percent, the steepest decline since the first three months of 2016, according to an April 29 Commerce Department report. Regional banks, meanwhile, are holding their own.

The percentage of severely delinquent loans for smaller and larger banks has converged in recent years, according to an April paper by economists Cortney Cowley and Ty Kreitman run out by the Federal Reserve Bank of Kansas City. Small banks have taken steps including higher interest rates and federal backing to mitigate the less favorable environment, Cowley and Kreitman wrote.

For farmers, more pain may be ahead. The Federal Reserve Bank of Kansas City last month said farmland prices may decline, and owners may receive lower returns on capital invested. That’s a change from the early stages of the downturn, when farmland values were relatively stable, and served as an attractive source of collateral for loans.

“This would be, in many cases, the fourth or the fifth year where these profitability issues are occurring, depending on the farm,” said Becky King, director of the agricultural lending group at First Midwest. The bank isn’t “seeing more foreclosures” according to King, but it is seeing “more stress.”