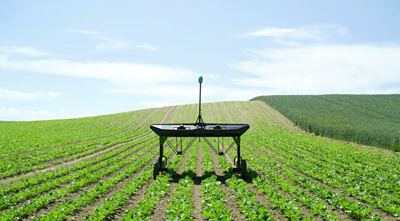 ecoRobotix, a Swiss farm robotics startup, has raised $10.7 million in Series B funding in a round led by European agrifood tech investor Capagro and the venture arm of German chemicals business BASF. The round also attracted existing investor 4FO Ventures (ecoRobotix’s first-round lead investor), and private investors from Swiss firms such as Business Angels Switzerland and investiere.

ecoRobotix was founded in 2011 with a mission to develop, produce and sell innovative farming machines that require low energy and that reduce the negative ecological impact of modern agriculture. Its first product is a solar-powered autonomous robot weeder that targets the application of herbicide based on GPS and sensors that enable it to detect weeds between crop rows. The startup will use the Series B proceeds to expand across Europe as it targets the multi-billion-dollar weeding market globally.

“After a successful Series A round of SFr3 million (about $3 million) in 2016, ecoRobotix is now entering the second phase of its existence, which is to grow into an international commercial company,” explained Aurélien G. Demaurex, CEO, and co-founder of ecoRobotix, in the official press release. “In addition to our historic investment partners, we are glad to see the interest of new European investors such as Capagro and BASF Venture Capital, who will contribute significantly to achieving our market access objectives,” he added.

For BASF, the investment is part of an internal effort to integrate sustainability across all of its business processes, according to Markus Solibieda, managing director at BASF Venture Capital.

Using robotics to automate weeding is a growing trend in the European agriculture industry over the past few years, with French companies like Naïo Technologies and Carré partnering up to develop autonomous weeding robots to aid farmers with herbicide application and hoeing as well. German startup Deepfield Technologies has developed a weeding robot as well, using mechanical weeding rather than herbicide application.

In the US, ag robotics produced one of agtech’s biggest exits when John Deere purchased Blue River Technology for $305 million last summer.