The U.S. biodiesel industry continued to face strong headwinds in 2019 due to the demand destruction wreaked by small refinery exemptions (SREs).  For example, in a previous farmdoc daily article (March 14, 2019) it was estimated that SREs reduced biomass-based diesel (biodiesel and renewable diesel) demand by over 700 million gallons in 2017, nearly a billion gallons in 2018, and projected destruction of another 800 million gallons for 2019.  At the same time, domestic biodiesel producers continued to benefit from support provided by import duties on biomass-based diesel imports from Argentina and Indonesia.  The biodiesel tax credit was also retroactively restored and extended in late December 2019 and this could have a major impact on profit estimates (farmdoc daily, March 29, 2017).  The purpose of this article is to estimate biodiesel production profits for 2019 and examine the influence of these factors on profitability.

This model is meant to be representative of an “average” plant constructed in 2007 to process soybean oil into biodiesel.  There is certainly substantial variation in capacity, production efficiency, and feedstock across the industry and this should be kept in mind when viewing profit estimates from the model.  However, limiting the feedstock to soybean oil is reasonable since it represents about half of the feedstock used to produce biodiesel in the U.S. and feedstock prices tend to be highly correlated.

To track plant profitability over time, weekly biodiesel and soybean oil prices at Iowa plants from the Agricultural Marketing Service (AMS) were collected starting in 2007.  Natural gas costs through 2013 are estimated based on monthly data from the Energy Information Agency (EIA).  Due to a change in the EIA price series, natural gas costs are estimated as one percent of the nearby NYMEX natural gas futures price starting in January 2014.  Glycerin and methanol prices were obtained from OPIS. 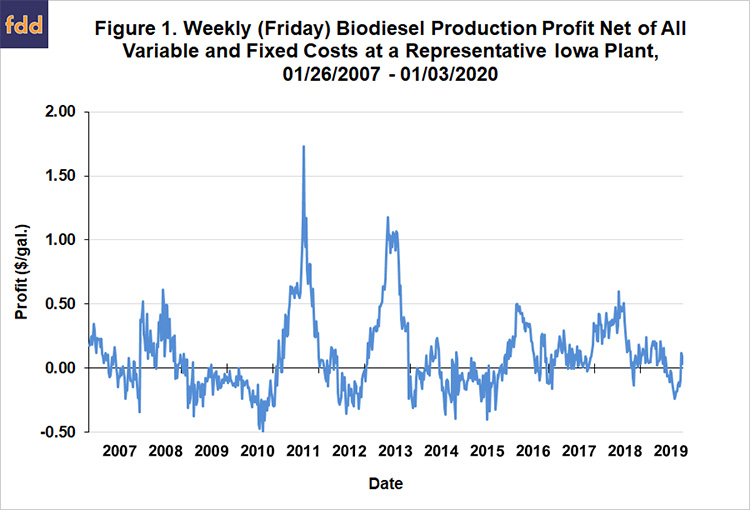 Additional insight about biodiesel profits is provided in Figure 2.  Here, the biodiesel price at Iowa plants is plotted versus a simplified breakeven profit relationship between soybean oil and biodiesel prices.  Since soybean oil represents over 80 percent of the variable operating costs of the representative plant, all other costs are lumped into the constant term of 0.60, or 60 cents per gallon of biodiesel produced.  The 7.55 slope is just the number of pounds of soybean oil assumed to produce a gallon of biodiesel.  The breakeven relationship tracks the biodiesel price reasonably closely in 10 of the 14 years in the sample.  The exceptions are 2011, 2013, 2016, and 2018.  Outside of these years, the market generally priced biodiesel based on the cost of soybean oil, a partial markup for other variable and fixed costs, and small profits or losses.  Implicit in this formulation is the idea that soybean oil prices lead (or cause) biodiesel prices at the weekly time horizon (farmdoc daily, September 10, 2015). 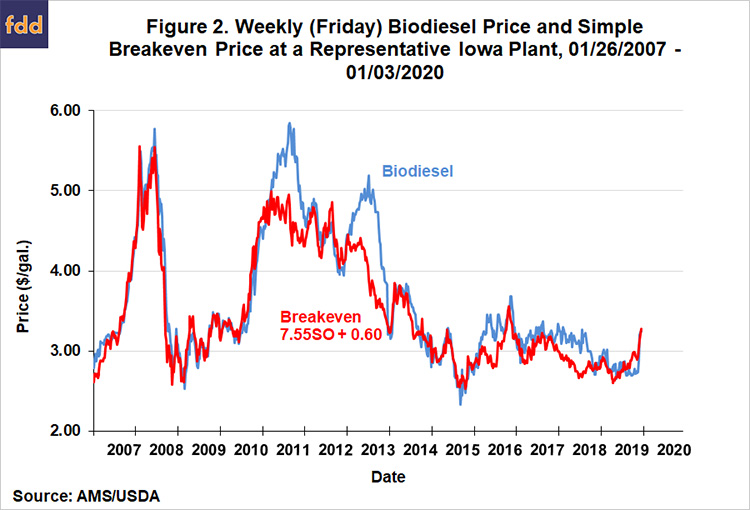 The spike in profitability during 2011, 2013, and 2016 can be directly traced to the race by diesel blenders to take advantage of the $1 per gallon blender tax credit that expired at the end of those calendar years.  The key is that blenders face a binding RFS biodiesel mandate, and it is rational to effectively purchase biodiesel at a discount in the current year, due to the tax credit, in order to meet mandates in later years.  Once the tax credit expires, the incentive to push up prices, profits, and production disappears and the biodiesel industry in the past returned to a norm of losses.  This cycle, of course, depends on blenders perceiving there is substantial uncertainty whether the tax credit will be reinstated or not for the following year.

A relevant question is why biodiesel profits the last three years (2017-2019) have been positive without the benefit of an expiring biodiesel tax credit.  This is especially interesting given the BBD demand destruction associated with SREs that has been ongoing on since early 2017.  Table 1 helps shed light on the situation.  The table presents estimates of biomass-based diesel (BBD) supply on annual basis for 2011 through 2019 based on EPA/EMTS data.  We utilize the EMTS data because, at least in theory, it should be a virtual census of domestic production and imports of BBD and the EMTS data allow imports of BBD from two different pathways to be fully accounted for in the estimates.  See the farmdoc daily article from July 19, 2017 for full details on the use of EMTS data to estimate BBD supply.

It is also helpful to aggregate the profit margins over an annual horizon in order to see broader trends in estimated biodiesel production profits.  Figure 3 shows total annual (pre-tax) profits net of variable and fixed costs for each calendar year between 2007 and 2019.  Profits are presented in terms of both total pre-tax net returns and percent return to equity.  The total profit of the representative biodiesel plant in 2019 was $980,000, or a return of 4.2 percent.  This was the fourth consecutive year of positive annual profits, the first time a four-year run of profits occurred in this sample period.  We can also use the average net profit for the representative plant to make a rough estimate of the profit for the entire U.S. biodiesel industry in 2019.  Assuming all plants in the industry earned a net profit of $0.03 per gallon, then, total biodiesel production (including renewable diesel) for the U.S. in 2018 of 2.173 billion gallons implies aggregate industry (pre-tax) profits of $65 million. 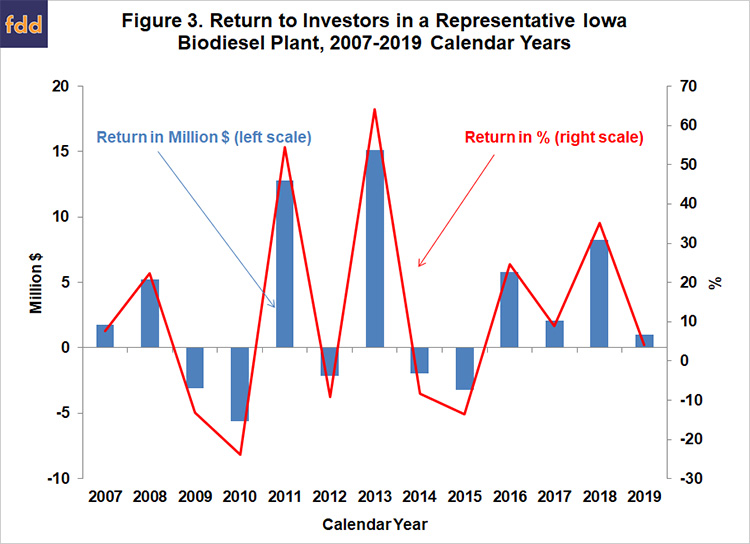 It is important to note that our profit estimates do not take into account revenue from retroactively reinstated biodiesel tax credits.  In response to the retroactive reinstatement of the $1 per gallon blenders tax credit, sharing clauses are included in many marketing contracts between biodiesel producers and blenders.  These clauses specify how the biodiesel tax credit will be shared between the biodiesel producer and blender if the tax credit is not in place at the time a transaction is made but retroactively reinstated at some later date.  There is no public data on the exact nature of the sharing provisions or the frequency that such provisions are put in place. Anecdotal evidence suggests sharing provisions are widespread and that the typical split of the $1 per gallon credit is 50/50.

We have previously shown (farmdoc daily, March 29, 2017) that this additional tax credit revenue, garnered through sharing agreements with blenders, can yield a dramatically more positive picture of the profitability of U.S. biodiesel production.  It would certainly be helpful then to have comprehensive data on sharing agreements in order to better estimate total biodiesel production profits in years when the tax credit is reinstated retroactively.  Since that is not the case, the best we can do is make what is hopefully a reasonable assumption that helps to illustrate the impact. As mentioned earlier, anecdotal evidence suggests 50/50 sharing agreements are the norm in the industry.  Hence, we add $0.50 per gallon to the returns in Figure 3 for 2010, 2012, 2014, 2015, and 2017-2019, the years when the tax credit was reinstated retroactively.  We plot both the unadjusted returns (same as in Figure 3) and the adjusted returns in Figure 4.  The impact of adding the revenue from the retroactively restored tax credit in this manner is very large.  Total estimated profits for the representative plant over 2007-2019 increase from $36 million without the tax credit revenue to $141 million with the revenue.  In the last three years, profits increase by a total of $45 million, and profits for 2019 increase from $980,000 to $16 million.  Of course, these estimates should be considered rough indicators at best because of the lack of data on the sharing agreements. 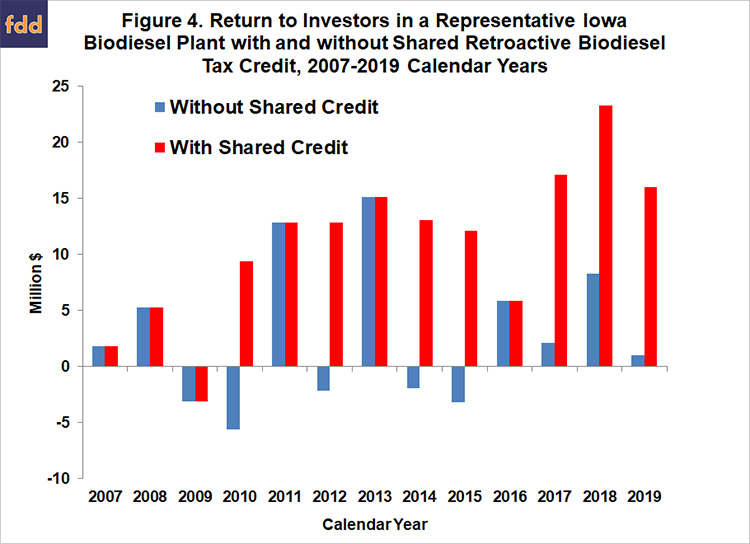 Headlines about the biofuels industry in 2019 were dominated by the bitter debate over the impact of small refinery exemptions (SREs) on demand.  We estimate the profitability of biodiesel production in this article and find that the total profit of a representative biodiesel plant in 2019 is estimated to be $980,000, or 4.2 percent.  This suggests a relative weak year for biodiesel plant profitability, but at the same time it was the fourth consecutive year of positive annual profits.  This highlights the critical role that import duties have played in supporting the profitability of domestic biodiesel production in the face of SRE-driven demand destruction.  Of course, the profits would have been even higher without the demand destruction caused by SREs, assuming the import duties remained in place.  Finally, the retroactive reinstatement of the $1 per gallon biodiesel tax credit almost certainly provided an additional lift to profits in 2019.  This effect is very large for firms that have sharing agreements in place with blenders, to the tune of millions and millions of dollars of additional profits.

Irwin, S. “The Profitability of Biodiesel Production in 2016.” farmdoc daily (7):38, Department of Agricultural and Consumer Economics, University of Illinois at Urbana-Champaign, March 1, 2017.

Irwin, S. “The Profitability of Biodiesel Production in 2015.” farmdoc daily (6):27, Department of Agricultural and Consumer Economics, University of Illinois at Urbana-Champaign, February 11, 2016.

Irwin, S. “Why is the Price of Biodiesel RINs Plummeting?” farmdoc daily (5):166, Department of Agricultural and Consumer Economics, University of Illinois at Urbana-Champaign, September 10, 2015.

Irwin, S. and D. Good. “Filling the Gaps in the Renewable Fuels Standard with Biodiesel.” farmdoc daily (7):130, Department of Agricultural and Consumer Economics, University of Illinois at Urbana-Champaign, July 19, 2017.