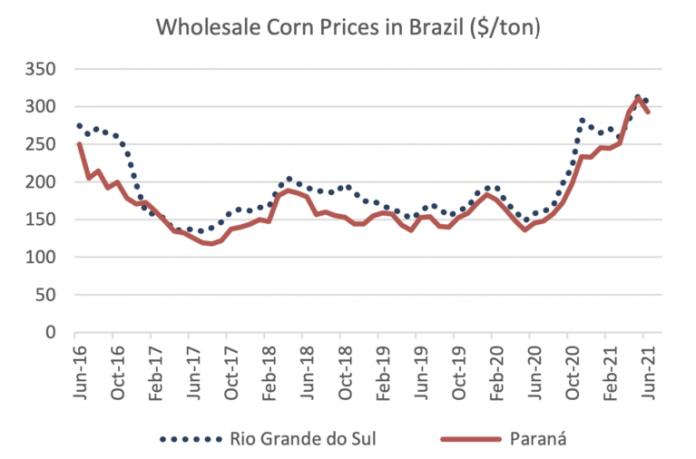 Earlier this week, in its monthly Grain: World Markets and Trade report, the USDA’s Foreign Agricultural Service (FAS) stated that, “Brazil corn imports (Oct-Sep) are forecast at 2.6 million tons for 2020/21.

If realized, it would be the largest volume on record.

“The forecast volume reflects strong domestic prices amid worsening prospects for the second crop corn. Prices have run up to a record level in the southern states, where poultry and swine production is concentrated.

“To help cool down prices, the government issued a decree in April exempting the 8 percent import duty on corn from outside of MERCOSUR countries through the end of 2021. There is no limit on import volumes under the decree.”

FAS explained that, “Corn imports have been primarily from Paraguay and Argentina due mainly to lower prices relative to domestic corn. Imported corn has been mainly destined to the states of Parana, Santa Catarina, and Rio Grande do Sul in the South. It is costly to move corn from production areas in the Center-West to feed users in these southern states. Also, facing a complicated interstate tax system, feed users in the southern states prefer importing from neighboring countries.”

However, the Grains report noted that, “Imports of U.S. corn have been insignificant reflecting in part the differences in biotech regulations. In June, Brazil approved the remaining genetically engineered corn event clearing the path for U.S. exports. However, it seems unlikely that Brazil will purchase an appreciable amount of U.S. corn in the short term given high U.S. corn prices as well as logistical advantages enjoyed by Paraguay and Argentina.”

With respect to U.S. crop prospects, Reuters News reported earlier this week that, “The U.S. government raised its forecast for the country’s corn harvest on Monday, topping the average of analysts’ estimates despite some concerns about dry conditions in key growing areas during June.

“The outlook for soybean harvest was left unchanged although that crop is still in early stages of development.”

Meanwhile, Reuters writers Julie Ingwersen and Karl Plume reported earlier this week that, “Farmers in the northern U.S. Plains are on track to harvest the smallest spring wheat crop in 33 years, reflecting the impact of severe drought in the key farming region, the U.S. Department of Agriculture (USDA) said on Monday.

State precipitation rankings ranged from the driest June on record in #SouthDakota to the second-wettest June in #Mississippi, https://t.co/vsAMXrnTEe pic.twitter.com/HJ4cYXanLA

“The shortfall in spring wheat, which typically represents a quarter of total U.S. wheat production, means tighter supplies of the variety used in bread and pizza dough, prized by millers for its quality and high protein content.”

The Reuters article added that, “Spring wheat production losses should be partially offset by a large U.S. winter wheat harvest, but U.S. supplies are still projected at the tightest in eight years, the USDA said.”

Also this week, Bloomberg writers Michael Hirtzer and Dominic Carey reported that, “As drought conditions bake the upper reaches of the U.S. Plains, American farmers are now expected to harvest their smallest oats crop in records that go back to 1866.

“Heat and dry weather are sapping yield potential in key growing states. This year’s U.S. harvest is estimated at 41.3 million bushels, the smallest ever, Department of Agriculture data showed Monday.”

And in news regarding agricultural production in China, Reuters News reported this week that, “China harvested more wheat this summer due to increased acreage planted and grain yield, the country’s statistics bureau said on Wednesday.

“Output of summer wheat, which accounts for most of the country’s wheat production, rose 2% from 2020 to 134 million tonnes, the National Statistics Bureau said in a statement on its website.

“Quality of the new crop in some top growing areas, however, might have been compromised due to bad weather, analysts said.”