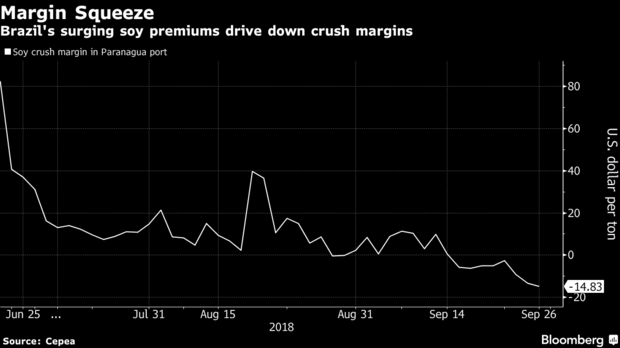 Crushers in Brazil are running out of soybeans amid tougher competition from Chinese buyers for the remaining 2017-18 season supplies.

Brazilian crushers have been working with negative margins since the second half of September, leading some to slow the pace of processing, according to Cepea, the University of Sao Paulo’s research arm. The soy rally that saw a doubling of premiums this year is squeezing domestic processors.

Other plants have halted activities, with some considering resuming only when the new harvest begins in the first quarter of 2019, said Debora da Silva, an analyst at Cepea. “Soy-product inventories are low, and some plants are signaling they no longer have soybean-oil to sell,” she said.

The group representing soybean processors in Brazil, known as Abiove, says crushing margins have been squeezed due to higher soybean prices, but it hasn’t affected the pace of processing, at least until August, the last month for which there’s crushing data available.

“The soybean industry has been meting international and local demand,” Daniel Furlan Amaral, economics manager at Abiove, said in a telephone interview.

Brazil’s soybean inventories are expected to fall to 1.5 million tons this season, the lowest since 1999, when Abiove started to compile the data. That’s a result of increasing demand from China amid a trade war with the U.S. and higher exports of soy products earlier this season to fill the gap left by a slump in Argentine production after the worst drought in decades.

Brazil shipped 69.2 million tons of soybeans through September this year, up 13 percent from a year earlier, Trade Ministry data show. In September, exports totaled 4.6 million tons, of which 91 percent went to China.

Since export prospects remain favorable, crushers may need to turn to imported soy-oil to meet domestic demand, Silva said. Brazil has a mandatory biodiesel mix in diesel of 10 percent, and 70 percent of the biofuel is made from the oilseed. In September, Brazil imported 10,000 tons of soybean oil, rising from 2,000 tons a year ago. It was the first soy-oil import since May.

“Differentials between Brazil and U.S. soy prices indicate that importing the oilseed for crushing may make sense for some Brazilian industries,” Amaral from Abiove said. “Still, I believe soybean imports, if they really happen, will be few, only to meet a very specific demand in the coming months.”