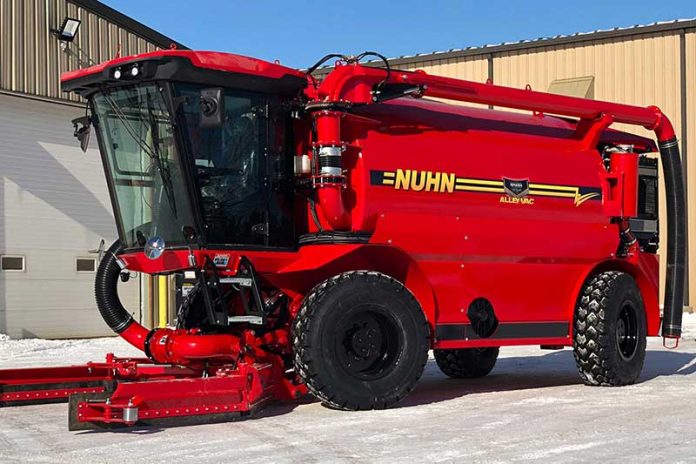 According to a complaint filed July 20 in the Southern District of Iowa, Canadian manure equipment manufacturer Nuhn Industries has filed a patent infringement lawsuit against Iowa-based manure injector and auger manufacturer Bazooka Farmstar.

The lawsuit claims Bazooka Farmstar’s Wolverine Agitation Boat infringes on Nuhn Industries’ patent No. 11,358,425, which covers its Lagoon Crawler amphibious agitation vehicle, saying, “Defendant has made, used, sold, and/or offered for sale products, including its Wolverine Series Agitation Boat, that infringe one or more claims of the ‘425 Patent.”

A separate lawsuit filed by Nuhn Industries on Nov. 16, 2021, in Wisconsin against Bazooka Farmstar and Tasch’s Custom LLC – a Bazooka Farmstar dealer in Malone, Wis. – alleges another instance of infringement against Nuhn’s patent No. 10,974,557, which also relates to Nuhn’s Lagoon Crawler and Bazooka’s Wolverine Agitation Boat.

The lawsuit cites posts from Tasch’s Facebook page advertising the Wolverine Agitation Boat, as well as information on its website stating it is a Bazooka Farmstar dealer, in stating, “Upon information and belief, Tasch’s has performed repairs to one or more Wolverine Series Agitation Boats in this judicial district. As such, Tasch’s serves as more than a mere sales arm of Bazooka, but also services the accused devices.”

That lawsuit was moved on March 17 to Iowa and is still open. The Order filed March 17 in Wisconsin moving the case stayed proceedings against Tasch’s Customs LLC, stating, “Defendant Tasch’s Custom LLC’s motion to dismiss or alternatively to stay (ECF No. 26) is GRANTED and all proceedings against Tasch are stayed until further order of the Court.”