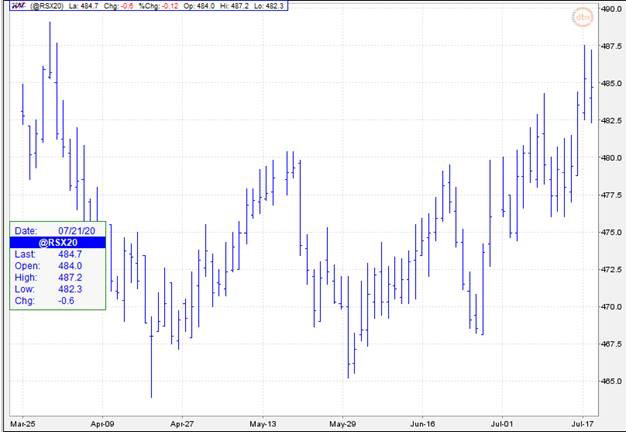 Provincial crop analyst Neil Blue takes a look at what is happening with the canola market.

“At about the halfway point of the growing season in late July, canola prices have been rising,” says Blue. “Drivers for the canola price improvement have been higher vegetable oil prices, higher European rapeseed prices and the Canadian dollar staying below 74 cents U.S.”

He notes that as usual in a market, there are supportive and non-supportive factors affecting the canola situation.

Canola demand has been much greater this crop year than was expected last fall.

“Canola carryover will be lower than expected earlier in the crop year, placing more reliance on 2020 canola production to meet demand in crop year 2020-21.”

Canola prices tend to be most affected by the oil component, and Blue says that vegetable oil prices have been rising lately.

“Rapeseed oil prices in China are up nearly 20% since early May. Flooding and labour shortages in Indonesia and Malaysia are expected to reduce palm oil production in those major producing countries.”

Restraints to continued higher canola prices are a potentially large U.S. soybean crop, which is currently 70%.

“August weather will largely determine the outcome of this year’s U.S. soybean crop. The condition of Canada’s canola crop is variable. Many areas of Alberta are overly wet, but overall Prairie yield potential is still high.”

Seasonally, as shown in the chart below, Blue say that this is the time of year when weather induced price rallies wane.

“Also, the futures chart is near the highs from earlier in the year and some technical indicators are ‘overbought.’ Market analysts are encouraging producers to shop for best canola basis levels and do some forward contracting at current levels, at least for part of the canola that they plan to deliver at harvest-time.”