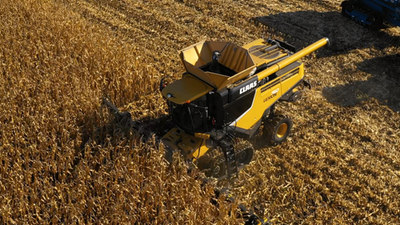 On October 10, 2010, Jeff Gray — a Product Manager | Field Support for CLAAS of America — harvested 51,153 bushels of corn in a 10-hour period in a CLAAS LEXION 760 TERRA TRAC combine at Stewart Farms Partnership in Yorkville, Illinois.

The impressive harvesting record, which remained unbeaten until now, is a testament to the massive throughput of the LEXION combine and the skillful hand of an operator who knows how to push these machines to the limit.

Recently, the Stewarts approached CLAAS with a proposition. They wanted to break the old 10-hour corn harvesting record on a field of theirs near Farmer City, Illinois. After some research, it was discovered that Guinness recognizes harvesting records for 8 hours and 12 hours, not 10. Undeterred, the Stewarts decided to break both the 8- and 12-hour world records, as well as the old 10-hour mark that was established on their farm nearly a decade ago.

“A lot has changed in the last eight years on the LEXION 760 TERRA TRAC,” explained Jeff Gray. “More engine horsepower, a higher capacity feederhouse drive, a larger grain tank, faster unloading, a more efficient DYNAMIC COOLING SYSTEM and higher capacity sieves made this challenge easier than the one we did in 2010.”

Maybe even more important than those enhancements are the operator assistance features found in CEMOS AUTOMATIC — the new flagship technology available as an option on 700 Series LEXION combines — which automatically and autonomously optimizes ground speed and system settings throughout the combine based on changing conditions. According to Gray, “CEMOS AUTOMATIC is able to make the same type of adjustments I made when I set the record — only faster and with more precision.”

One component of CEMOS AUTOMATIC that Bob Stewart really appreciates is CRUISE PILOT. “The CRUISE PILOT will actually optimize its own speed and make the adjustments for you on the back end. It’s a big deal.”

Countdown to the World Record

At 8:52 a.m., on Wednesday, September 26, Bob pushed the CMOTION control lever forward on the CLAAS LEXION 760TT combine and 16-row header as the 12-hour countdown clock was started. The conditions were not ideal. After receiving more than half an inch of rain the night before, the corn coming into Tate and Lyle Grain Elevator in Parnell, Illinois, was at 17-18 percent moisture levels. Bob Stewart got the vast majority of the stick time in the combine throughout the day, with Jeff Gray only stepping into the cab on two different occasions.

“I jumped in a couple times. Once to check the settings on CEMOS AUTOMATIC and see what adjustments it was making and another to give Bob a little break between hours 8 and 12.”

While Bob was driving the combine, his brother Brad managed the logistics of the record attempt. His job was to keep three grain carts and 10 trucks running at top speed to keep up with the nearly constant unloading of the CLAAS LEXION combine. “The machine is very impressive. It’s incredibly reliable and just eats corn! Our biggest worry was having enough trucks so that we didn’t keep the combine waiting.”

One key feature on the new LEXION combine is called TELEMATICS. This on-board technology transmits real-time performance information back to computers and mobile devices authorized to receive it. It allowed real-time monitoring of the record for the many people tracking the attempt.

For each of the three records, the Stewarts were required to bring their combine to a full stop, unload any grain in the tank into a grain cart, and unload the grain cart into a waiting truck. The truck was sent to the elevator where the grain totals were tabulated.

At the end of 12 hours, the combine came to a complete stop and the lone remaining truck made its way to the elevator. The final result after 12 hours: 63,770.10 bushels. With that, the Stewarts had set their third record for the day.

While the results are still being confirmed by Guinness, third-party witnesses and tabulations by the grain elevator show that new records have been set.