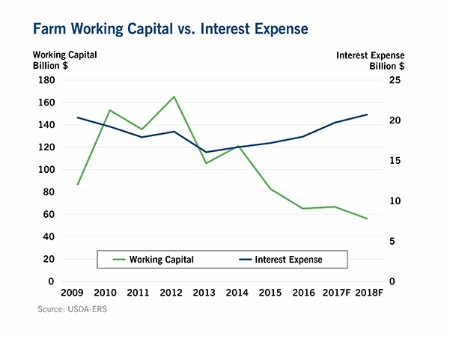 More financial burden is on the way in agriculture and rural America with interest rates marching steadily higher. Since 2015, the Federal Reserve has been nudging interest rates higher following years of historically low rates and quantitative easing.

Now, with The Fed on a path of rising rates and monetary tightening, rural America will be faced with increased interest expense, which is in addition to other cost burdens, such as higher steel and aluminum prices, higher labor costs, and rising fuel and transportation costs. Higher interest expense will be another burden affecting farmland purchases and operating loans, according to a new report from CoBank’s Knowledge Exchange Division.

“Rising interest rates could have significant impact on local land values,” said Tanner Ehmke, manager of CoBank’s KED. “A 10 to 15 percent drop in real estate values would push the farm debt-to-asset ratio to around 14 percent, which is manageable in comparison to the 1980s Farm Crisis, but not optimal. At the same time, USDA is forecasting a debt-to-income ratio of 6.5x, which is up from last year and at a concerning level. Coupled together, the collective economics for rural agribusinesses are not improving.”

While the current projections indicate rising costs, the collective agricultural industry should have the capacity to service its debt in the near term. However, farmland values and debt vary widely by location and industry. Some industries have been hit harder by lower agricultural commodity prices and will see more pressure than others in a rising interest rate environment. The U.S. Corn Belt and Northern Plains regions, for instance, will experience greater stress than the Pacific and Northwest regions.

Visit CoBank.com for the full report, “Rising Interest Rates Will Add to Inflationary Stress on Agriculture and Rural America.”