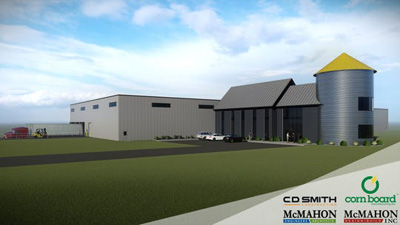 Corn Board Manufacturing, partnering with McMahon Associates, a Wisconsin engineering and architectural firm, says it will build a plant that will make a wood alternative from corn stover, the plant debris that’s typically left in the field after the crop is harvested.

The patented product, called CornBoard, can be used to make pallets that weigh less than those made of wood but have the same structural integrity, the company says. The company already uses CornBoard to make ski, snow and skateboard equipment under the Stalk It brand name, as well as indoor and outdoor furniture.

Corn Board Manufacturing CEO Lane Segerstrom said construction of the 50,000-square-foot plant is slated to begin in the spring on 40 acres west of Odebolt in Sac County.

The company’s first large-scale production plant, it is expected to employ up to 30 people.

Segerstrom said the Corn Board will look to about 30-50 farmers to provide the plant about 50,000 bales – or 50 million pounds – of corn stover annually.

Corn Board expects to pay farmers as much as $750,000 for the corn residue, which the company will bale and transport, said Segerstrom, who grew up in Ida Grove about 20 miles west of Odebolt. In the manufacturing process, the corn scrap is sifted, sorted and combined with a resin, then bonded under heat and pressure into boards, according to the company’s website.

The company has been working for two years with a group of Sac County farmers to test the feasibility of collecting corn stover, Segerstrom said.

“They convinced us that we should be in Sac County,” he said. “Farmers are interested in another revenue stream that’s consistent.”

Segerstrom said he’s looking at other plant locations to meet the growing demand for eco-friendly pallets. The company has a research and development plant in Stratford, Texas.

“Customers want pallets that don’t cause deforestation and (are) more sustainable,” he said, adding that the company could look to the state of Iowa for possible incentives.

Corn Board Manufacturing said a million acres of U.S. forests are cut down to make pallets annually. And many of the pallets are used one time and then sent to a landfill. The company said customers can lease the CornBoard pallets and return them to be reused or broken down, recycled and remade into more pallets.

Debi Durham, executive director of the Iowa Economic Development Authority, said in a statement that the plant is a good fit for the state, given its manufacturing and agricultural roots.

Iowa is the nation’s leading producer of corn, raising an estimated 2.34 billion bushels this year.