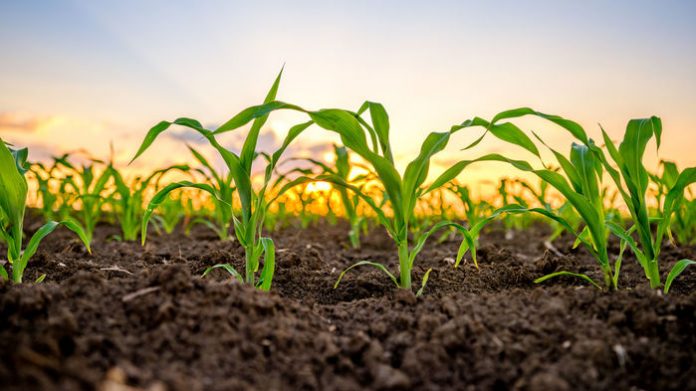 Enhanced Coverage Option (ECO) became available as an add-on to a farm-level crop insurance product in 2021. While available for other plans, we focus on Revenue Protection (RP) in this article.  Farmers who purchase Revenue Protection (RP) now have the option also to purchase ECO, which provides RP-like protection using county revenues from either a 95% or 90% coverage level down to 86% (farmdoc daily, November 24, 2020). For corn, current data in the Summary of Business indicate that 2.5% of RP policies also have an ECO endorsement (Summary of Business, Risk Management Agency). ECO has higher use in the heart of the Corn Belt, where RP coverage levels also are higher.

Figure 1 shows average RP coverage levels for corn policies in 2020. Only RP policies are shown because RP represents over 90% of the Federal crop insurance policies sold in 2020 (farmdoc daily, November 17, 2020). In Figure 1, counties shaded in green have average coverage levels over 80%. Most of these counties are in a band from southern Minnesota through northern and central Iowa, Illinois, and Indiana, extending into western Ohio. This area generally is regarded as the heart of the Corn Belt. 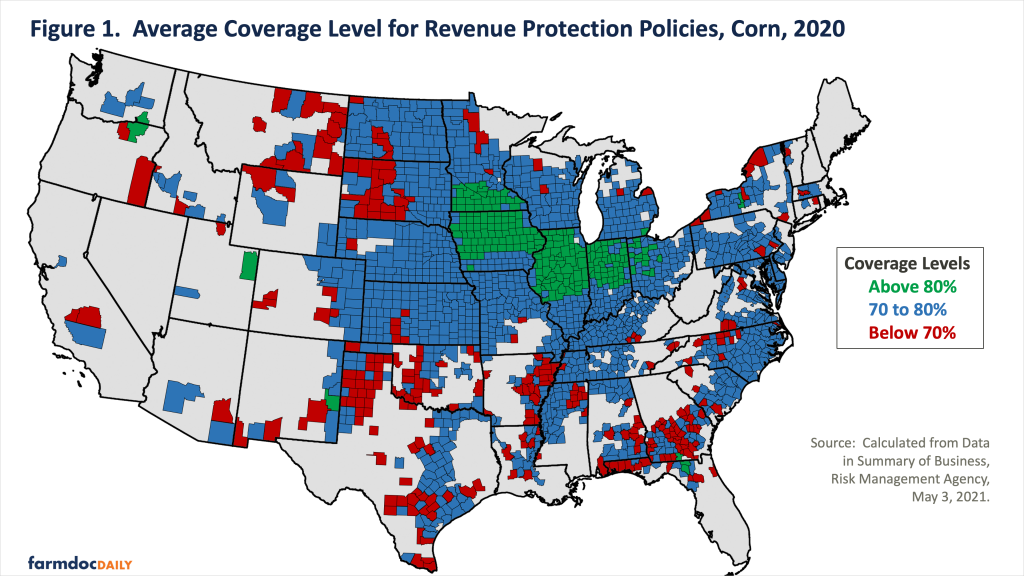 Scattered counties with red shading in Figure 1 have loss ratios below 70%, generally in areas that have high risk.

In general, counties with the highest average coverage levels tend to be in areas that have lower production risks. For example, the heart of the Corn Belt has good weather and favorable soils, causing these areas to have lower production risks relative to areas outside the central corn belt. In central Illinois and Indiana, the major production risk is a chance of drought, which from a historical perspective happens less than 1 in 20 years. Iowa and southern Minnesota’s risks are less from droughts and more from wet weather and delayed planting. In all areas in the heart of the Corn Belt, production risks are relatively low.

The Enhanced Coverage Option (ECO) was a product first available in 2021. One suspects that most of the sales of this product happened in areas where average coverage levels were the highest. In these high coverage areas, many farmers use the highest coverage level of 85%. Polices such as ECO may present farmers with opportunities to insure at higher levels at what many regard as reasonable costs.

At this point, finalized values for acres insured with RP and ECO are not available; however, policies sold will give a good indication of farmer behavior. Polices sold for RP, and ECO with RP, on corn acres were collected from RMA’s Summary of Business on May 3, 2021. ECO policies are summarized by counties grouped on 2020 average coverage levels for RP. The same breakdowns as shown in Figure 1 are used: 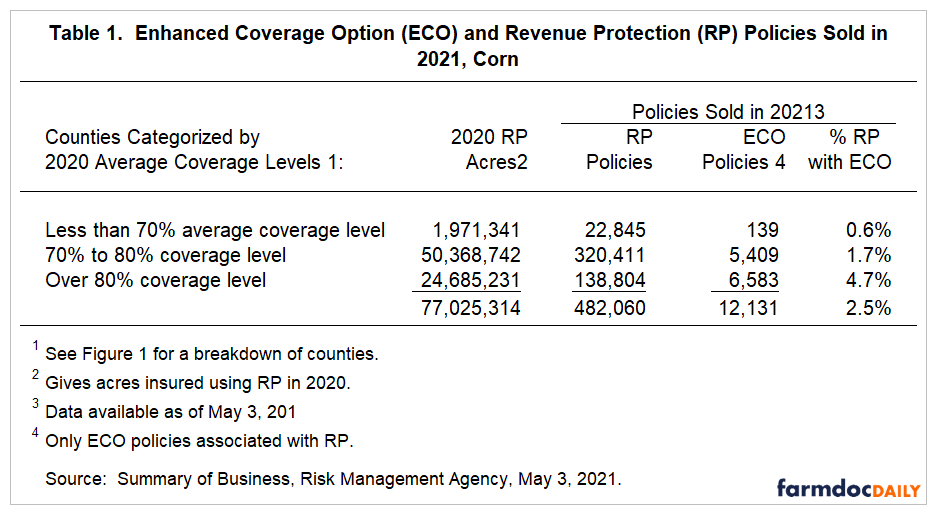 Overall, 2.5% of RP policies used the ECO option in 2021. As expected, more ECO policies were purchased in counties where RP coverage levels were higher, generally in the heart of the Corn Belt.  ECO was used at relatively high coverage levels as well, with 86% sold with the 95% coverage level, the highest available coverage level.

USDA Rates 61% Of The Corn, 60% Of Soybeans Good To Excellent