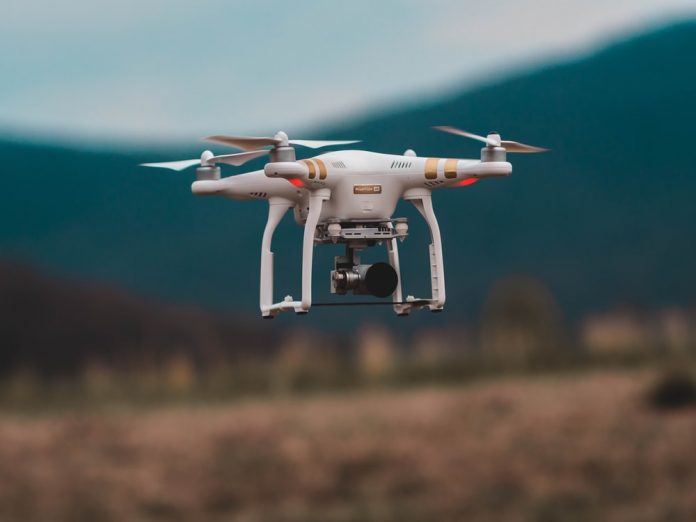 Members of the Nebraska City Rotary Club experienced a virtual fly-by from the future of agriculture on Wednesday, June 30, during the club’s regular weekly meeting at Valentino’s restaurant.

Kevin Knorr and Todd Knorr of Volitant Drone Technology Solutions gave a presentation on the advantages of drone technology in executing precision farming.

Jenniffer Panko-Rahe was the Rotarian responsible for lining up Wednesday’s program. Panko-Rahe said she felt the presentation by Volitant Drone Technology Solutions would be of interest since this particular application of drone technology is so new to the scene.

A number of drones were on display at the Valentino’s as a reference as Kevin walked club members through the ways the drones are used specific to agricultural production.

In a past visit to the NC Rotary, Kevin gave a talk about the ways drones could be used for photography—in stiching together maps, for use by real estate businesses in displaying property or by event organizers by way of creating eye-catching imagery.

In terms of agriculture, Kevin said drones have applications in analyzing the health and needs of crops in the field, in spraying chemicals to aid growth and prevent weeds and also to spread seed and other products.

In terms of crop analytics, producers have counted on satellites and fixed wing aircraft to deliver images. These options can be cost restrictive and, in the case of satellite images, could provide older images that are not as helpful to the producer.

During a recent drone flight, Kevin said one of his drones was flying 180 feet in the air, traveling at 17 miles per hour and taking a photo every two seconds. That made for 3,700 images in a 37 minute window.

Those images could then be put together to show what a field needs. The images could indicate, for instance, where chemicals are needed or where they are not needed, to aid the crop.

A more precise application of chemicals would then save money for the producer and could be better for the environment as well.

When it comes to chemical application, the drones operate in a way that’s revolutionary compared to previous technology. The drones are capable of finding an altitude not only in contrast to a starting point on the ground, but also in terms of height compared to changing terrain. This is key to spraying effectively since the drone has to be at a certain height over the crop for correct application.

Drone technology allows for the application of 1.6 gallons of product over a 23 feet width per pass through the field. Drones can cover as much as 30 acres in an hour. Kevin said 15 to 20 acres is probably a more reliable number.

That coverage ability for drones will increase with better technology and also as regulations allow for more drone usage.

In the future, Kevin said trends suggest agriculture producers will use smaller equipment in greater numbers.

A price point for purchasing one of the drones is in the range of $21K, but would be more for the most advanced models available.

The market for drones is still one that’s developing.

“They are really not all that widely used yet in the United States,” Kevin said, but added that the use is rising rapidly.

Kevin said the drone market could be a $32 billion industry in years to come.

As usage of drones evolves in agriculture, Kevin said Volitant is serving niche markets for producers with smaller fields, specialty crops or fields with obstacles that a drone can navigate where a fixed wing plane could not.

“There are opportunities out there,” he said.