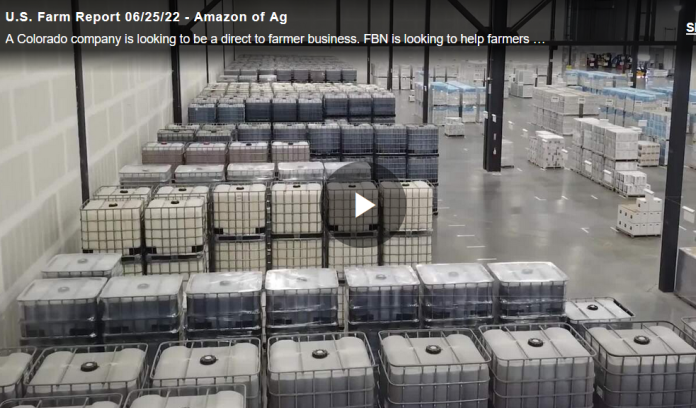 Just outside of Denver, Colo., is where you’ll find one of five Farmers Business Network (FBN) fulfillment centers located across the country.

“We’re in Brighton, Colo., which is what we call a primary fulfillment center,” says Jack Cox, vice president of global fulfillment and logistics for FBN. “This is a true e-commerce business, a direct-to-farm business.”

Cox, who previously worked for Amazon, is one of the masterminds behind the fulfillment center.

“What this building represents is all the speed, all the reliability, all of the ease of ordering and the ease of delivery that people have come to expect in other segments,” says Cox.

Cox says Amazon and Walmart.com delivery services have reset expectations in the consumer world, and he now claims FBN is doing something similar.

“We have the ability to get you anything you want quickly and reliably, and that’s what this really represents,” he says.

The five FBN fulfillment centers located across the U.S. serve as primary hubs for storing agricultural inputs and products, some of which are manufactured by the company.

“We have a lot of automation, when an order comes in, it gets assigned to a building through our systems, that is all automated and happens often within 15 minutes of an order being cleared through our approval process,” says Cox.

While the e-commerce system sounds high-tech, there’s actually not a heavy amount of automation inside this facility. Instead, it’s employees who fulfill the orders and cross check quality and quantity of products being prepped to ship. FBN also launched their own trucking fleet this year.

“One of the nice things about having that truck is we’ve told the customer the day before we’re coming, but now our driver has much better communication and much more reliable communication to say, ‘Here’s where I am, this is the time I’ll be there,’ and we can coordinate a little bit more closely with that grower.”

Since it was founded in 2014, FBN’s model and philosophy has met strong resistance among major seed and chemical manufacturers, ag retailers and even some farmers. Their go-to-market strategy has also shifted as e-commerce didn’t see quick adoption by farmers when buying ag inputs.

As co-founder of the company, Baron had an outside view of agriculture from the start. Baron grew up in California and holds a MBA from Harvard. Before 2014, his resume didn’t list any agriculture experience . Instead, his previous career included a job in Silicon Valley with Google.

Baron eventually married into agriculture. Through his brother-in-law, a Nebraska farmer, Baron got a taste for agriculture and discovered an opportunity for a business like FBN.

“Amazon has taught the world what to expect, that when I click the button, products are going to show up two days later, and then I can always see what the price is,” says Baron. “Those are great things that exist in the consumer world that don’t exist in agriculture.

Considering Cox previously worked at Amazon, he saw how even that business transitioned and grew. In the beginning, he says consumers were also hesitant.

“This was Amazon 20 years ago,” says Cox. “When they first started, you could still call and view a catalog and give them your credit card instead of doing it online. You ease people into it, but once they get it, they get it and the future is inevitable.”

While FBN is expanding the e-commerce offerings with the new fulfillment centers, Cox says FBN also sends products to satellite locations across the U.S. For example, a facility in Hays., Kan., holds inventory.

“You can have an order delivered from Hays locally, and as soon as that happens, we’re going to replenish from the inventory here,” he says.

Even if FBN is getting closer to becoming the Amazon of agriculture, the data shows farmers have been slow to shift how they purchase crop inputs.

Farm Journal has conducted an e-commerce survey since 2018. It shows 8% of farmers purchased crop inputs online in 2018, and by 2021 that number had only climbed to 14%. The hesitation may be rooted in the fact the majority of farmers don’t see a reason to change how they buy their crop inputs, as 80% say they are satisfied with their input provider today. 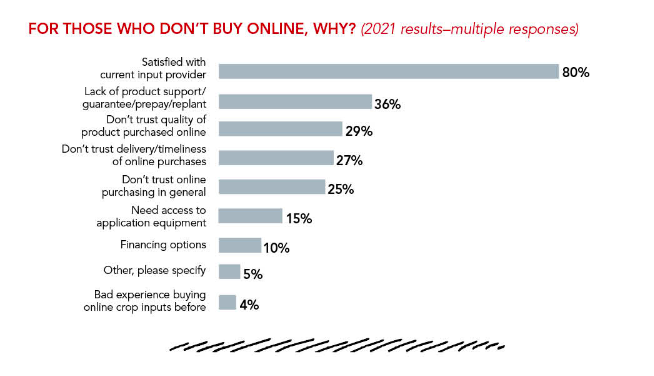 Farm Journal also discovered when farmers are considering purchasing crop inputs, price continues to be the top factor, followed by availability and ease of purchasing, along with delivery.

The supply chain issues and concerns about sourcing inputs for this growing season may have prompted more farmers to shop online as FBN says their e-commerce sales did see an uptick this year. The biggest interest came from those items that some local ag retailers couldn’t guarantee price or quantity, including glyphosate and glufosinate.

As e-commerce adoption in ag remains slow, FBN has changed up its original model. The company now has a field-based sales organization that works directly with farmers, similar to the conventional ag retail structure.

The company is also offering products outside of the crop world  expanding into livestock and products that apply to the animal health sector. No matter what product a farmer or ranchers wants to buy, farmers looking to find a product they need in a matter of days is where Cox says FBN is different.

“If you’re a farmer and you’re in northeast Nebraska and you’ve placed an order or you’re going in to look at your cart, if you pick this item and it’s here in Brighton facility, it’s going to say we will deliver this by a certain date,” he says. “For that area, typically it’s one or two days for that grower who’s fairly close to this facility.”

Cox admits selling and delivering ag inputs is very different than what happens in the consumer world. That’s another reason FBN decided to invest in its own truck fleet to deliver products.

“In the rural environment, the address isn’t necessarily the shed where the farmer wants his product. The roads might not be always clearly marked — there’s a lot of challenges there,” says Cox. “We figured it was best to kind of jump the gap ourselves, put our own trucks on the road, really manage that delivery experience ourselves and  offer something that’s just not available in the market.”

From manufacturing some of its own chemicals to moving more of the purchasing of crop production inputs online, Cox says none of it has been easy or cheap. But he believes it’s those investments helping FBN become the Amazon of agriculture.

New Holland Collaborates With Microsoft And Touchcast At CES 2023