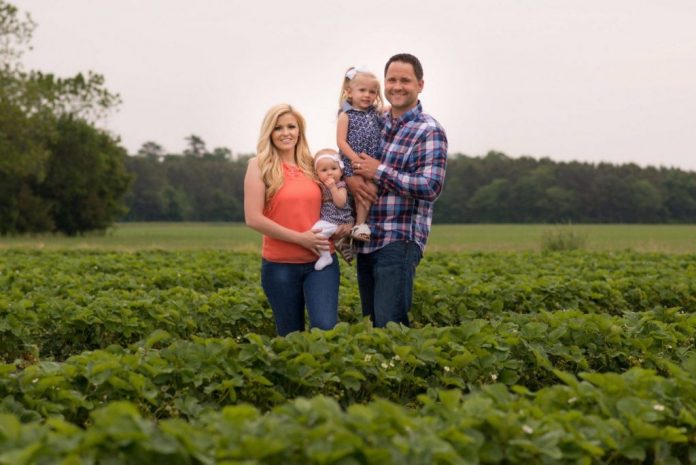 Evans pitched a full line of super premium ice cream, dairy-free, gluten-free, and fat-free sorbet, along with “nice cream,” a unique blend of ice cream and sorbet, on March 27. She struck a deal with “Shark Tank” investor Lori Greiner for $125,000 for 30-percent of her farm creamery business, The Frozen Farmer.

“These ice creams are the best I’ve ever had in my entire life” said Greiner in the episode. “I think that your product is fantastic. You have something I think is blue ribbon.”

Many of the Frozen Farmer products are made from the misfit fruits from the fields of Evans’ family’s third generation farm, Evans Farm in Bridgeville, Delaware. Evans, along with her husband Kevin and her mother, Jo Ellen Algier, created the super-premium product line that contributes to cutting food waste and creates a value-added product.

“More than 20 percent of the fruits and veggies in America don’t make it off the farm because they aren’t perfect enough for the grocery store shelves, resulting in billions of pounds of waste annually,” said Evans. “We’re taking the concept of “farm to table” to the next level, with a product that offers a way to reduce food waste directly at the farm level by using the imperfect fruit we grow for our line of frozen confections.”

Evans describes the taping of her “Shark Tank” segment last September as “a fight for my life,” and included some tears as she recounted her late father-in-law’s tenacious work on the farm.

Greiner’s investment relied on Evans’ ability to get The Frozen Farmer into a major national chain. But in the six months between filming the episode and its airing last Friday, Evans already accomplished that goal.

“You can find The Frozen Farmer on the shelves of every Giant Foods store in the nation,” said Evans, building on the relationship that 2,000-acre Evans Farms already has in supplying the grocery store chain with produce. Giant Foods carries some of The Frozen Farmer’s fruit flavors like strawberry sorbet and orange creamsicle “nice cream,” along with traditional favorites like chocolate, vanilla, butter pecan and cake batter confetti.

“This isn’t just about us, it’s about ALL of us – a total food movement for farmers and consumers to become more mindful of where food comes from and how to reduce food waste at any level of consumption,” said Evans.

Before the segment taped, The Frozen Farmer had started preparing for e-commerce distribution. Since the airing, the company has scaled production to allow for nationwide distribution and has heard from interested customers all across the globe. Evans says they will launch e-commerce in late April and that customers can sign up for online purchasing at TheFrozenFarmer.com.

She also wants to land them on the shelves of other major national grocery chains across the nation. That’s where she feels Greiner’s expertise can really help. Greiner noted she would assist The Frozen Farmer with packaging improvement “no matter what,” even before she made Evans an offer.

“We are humbled by the opportunity to present our farm-made products on a national platform,” said Evans. “It’s been an incredible experience hearing from folks all over the world asking for our ice creams. Soon we will be able to deliver to doorsteps and hopefully grow into more grocery chains across the country. Thanks, Shark Tank!”

About The Frozen Farmer:
A division of Evans Farms LLC., a third generation family farm located in Bridgeville, Del., The Frozen Farmer produces homemade, farm fresh treats including ice cream, “nice cream” and sorbet. Aimed to bring healthier alternatives to families by centering the menu on the farm fresh ingredients grown and harvested at Evans Farms, The Frozen Farmer takes the “farm to table” concept one step further as the founders are both the farmers and the chefs of the locally produced ingredients around which their menu centers.