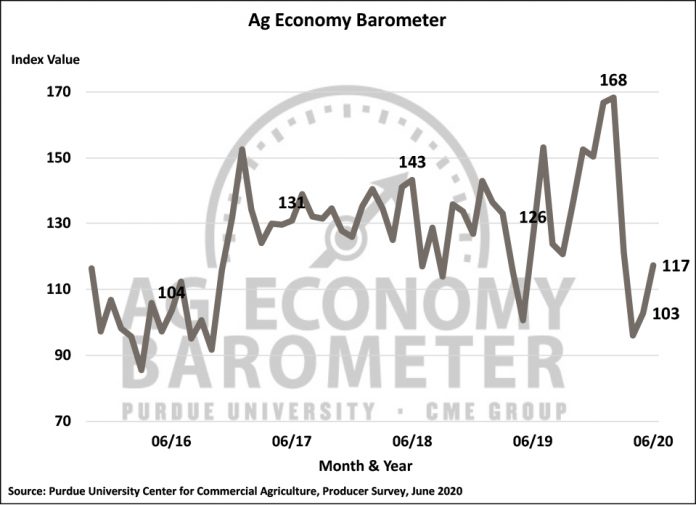 Farmer sentiment improved again in June as the Purdue University-CME Group Ag Economy Barometer rose 14 points to a reading of 117. The barometer’s rise was fueled by improvements in both the Index of Current Conditionswhich rose to a reading of 99, 19 percent higher than a month earlier, and the Index of Future Expectations which climbed to 126, 12 percent higher than in May. The improvement in farmer sentiment left the Ag Economy Barometer7 percent below one year earlier, while the Index of Future Expectations was still 10 percent below its June 2019 level. The Index of Current Conditions, however, was two percent higher than in June 2019, likely reflecting considerably improved spring planting conditions throughout much of the nation, in addition to support from USDA’s Coronavirus Food Assistance Program (CFAP). The Ag Economy Barometer is calculated each month from 400 U.S. agricultural producers’ responses to a telephone survey. This month’s survey was conducted from June 22-26, 2020.

Farmers’ perspective regarding whether or not now is a good time to make large investments in their farming operation improved markedly over the last two months. The Farm Capital Investment Index recovered to a reading of 60 in June, 10 points higher than a month earlier and 22 points higher than the low reached in April. The recovery still left the index 12 points below the 2020 high established back in February. For the last 4 months, we’ve also been asking farmers about their plans for farm machinery purchases in the upcoming year compared to a year ago. Responses to this question suggest producers’ plans for machinery purchases dipped noticeably during April and May, but recovered to their March level in the June survey, which, on the surface, appears to be consistent with the improvement observed in the investment index.

Although farmers were still concerned about the impact of coronavirus on their farms in June, they were slightly less concerned than a month earlier. When asked about the virus’ impact on their farms’ profitability, 64 percent of respondents said they were either “very” or “fairly worried”, down from 71 percent of respondents that felt that way in May. In light of ethanol plant shutdowns and slowdowns in response to poor operating margins, a large majority of farmers (73 percent) still expressed concern about the ethanol industry’s future viability, but this was also down somewhat compared to the 81 percent of respondents who expressed concern in May. The June survey provided the first opportunity to survey farmers after details of the Coronavirus Food Assistance Program (CFAP) were widely available. Sixty percent of farmers in the June survey said CFAP “somewhat” (53 percent) or “completely” (7 percent) relieved their concerns about the impact of COVID-19 on their 2020 farm income with just over one-fourth of respondents (26 percent) responding “not at all” to this question. However, nearly two-thirds (64 percent) of June survey respondents still said they think it will be necessary to pass another bill to provide more economic assistance to farmers in 2020, similar to May when 67 percent of respondents felt that way.

Farmers’ short-run outlook for land values improved markedly over the last two months. The percentage of respondents expecting land values to decline over the next 12 months fell to 21 percent in June, down from 29 percent in May and 35 percent in April. The shift in perspective on farmland values was even more pronounced when farmers were asked for their opinion on farmland values five years into the future. Fifty-five percent of respondents said they expect farmland values to rise over the next five years, up from just 40 percent that felt that way in May. Finally, for the second month in a row, we asked farmers who rent farmland if they expect to ask their landlords to reduce their 2021 farmland rental rate as a result of COVID-19. In May, 27 percent of respondents said they expected to ask for a rent reduction next year. In June, however, just 17 percent of farmers responding to the survey said they expect to ask for a rent reduction in 2021.

Concerns about COVID-19 are leading to changes in business practices throughout the U.S. economy. To learn more about how business practices among farmers are changing, we asked farmers about conducting business online and their willingness to attend in-person educational programs. Four out of ten respondents on the June survey said they have increased the amount of business they conduct online, and just over half (53 percent) of respondents said they are less likely to attend in-person field days or educational programs during the remainder of this year due to concerns about COVID-19.

For the second month in a row, farmer sentiment improved as the Ag Economy Barometer rose 14 points to a reading of 117. Farmers became more optimistic about both the current situation and their expectations for the future as both the Index of Current Conditions and the Index of Future Expectations rose in June compared to May. Farmers were more inclined to think that now is a good time to make large investments in machinery and buildings than they were in either April or May. Although farmers are still worried about the impact of the coronavirus on their farms’ profitability, they were somewhat less concerned in June than they were in May. Fewer farmers in June than in May said they expect their farms’ financial performance to be worse this year than in 2019. Moreover, fewer farmers expect farmland values to weaken in the upcoming year than in May. Additionally, when asked to look ahead five years, survey respondents were more likely to expect farmland values to rise than when the same question was posed in May. Finally, four out of ten farmers said that as a result of concerns about COVID-19, they are conducting more business online, and over half of respondents said they are less likely to attend in-person educational events in 2020.