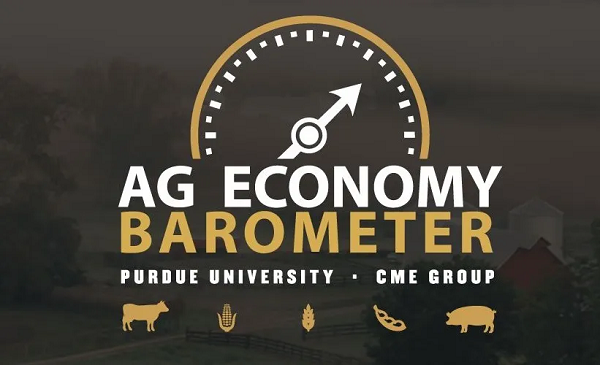 Producer sentiment improved sharply in December as the Purdue University-CME Group Ag Economy Barometer Index reading of 126 was 24 points higher than a month earlier. Although U.S. farmers were more positive regarding both the current situation as well as their expectations for the future, by far the biggest improvement was in their assessment of current conditions. The Current Conditions Index reached 135, 37 points higher than in November while the Future Expectations Index hit 122, 18 points above a month earlier. The Purdue University-CME Group Ag Economy Barometer sentiment index is calculated each month from 400 U.S. agricultural producers’ responses to a telephone survey. This month’s survey was conducted from December 5-9, 2022.

The improvement in current sentiment was motivated by producers’ stronger perception of current financial conditions on their farms as the Farm Financial Performance Index climbed 18 points above the prior month’s reading to reach 109 which was the only time in 2022 that the index was above 100. The turnaround in the Financial Performance Index this month was driven by a sharp increase in the percentage of producers who expect better performance than last year which jumped from 23 to 35% of respondents. Meanwhile, the percentage expecting weaker performance fell from 32 to 26%. The change in perception among producers regarding their farms’ financial situation could be attributable to producers taking time to estimate their farms’ 2022 income following the completion of the fall harvest. This month’s improved assessment of farm financial conditions is consistent with USDA’s forecast for strong net farm income in 2022.

Despite the improvement in farmers’ perception of their financial situation, both the short-term and long-term farmland value indices continued to drift lower in December. The short-term index fell 5 points to 124 while the long-term index declined from 144 to 140. Although both farmland value indices remain in positive territory, when examined over the course of the last year it’s clear that sentiment among producers about farmland values has shifted. For example, compared to a year ago the percentage of respondents who expect to see farmland values decline in the upcoming year increased from just 6% to 15% while the percentage expecting to see values rise declined from 59% to 39%. Among producers who expect farmland values to rise over the next 5 years, just over three-fourths of them said that a combination of non-farm investor demand and inflation are the main reasons they expect to see values rise.

Looking to the year ahead, the December survey asked producers to compare their expectations for their farm’s financial performance in 2023 to that of 2022. Producers indicated they expect financial performance in 2023 to fall below this year. Responses to the question about 2023 provide a financial performance index value that is 18 points lower than for responses from the question asking producers to compare 2022 to 2021. Rising costs and narrowing margins are key reasons for the lower index in 2023. Concerns about costs continue to be top of mind for producers’ when asked to look ahead to the upcoming year. For example, nearly half (47%) of the crop producers in this month’s survey said they expect farmland cash rental rates in 2023 to rise above the prior year. And in a related question, 45% of producers cited higher input costs as their top concern in 2023 followed by rising interest rates (22% of respondents) and lower crop or livestock prices (13% of respondents).

Farmer sentiment improved markedly at year-end as the Ag Economy Barometer index rose 24 points compared to November. December’s sentiment reading was the most positive of 2022, just barely eclipsing the February index value. The biggest shift from November to December was producers’ improved perception of current conditions, although expectations for the future also improved. A recognition among producers that farm financial performance in 2022 was stronger than expressed in previous surveys was likely the primary reason for the improvement in the Current Conditions Index. Although the Future Expectations Index also rose this month, farmers expect their farms’ financial performance in 2023 to be weaker than in 2022, citing higher costs as a key reason.