But, ag land is also an important part of wealth for non-operating landowners. In fact, non-farmer owned land in some counties in major ag states is over 60%, meaning that inheritors, local investors, and retired farmers own a majority of the farmland (USDA NASS).

In the next 20 years, 70% of the nation’s farmland will change hands by sale, will, trust beneficiary, or gift (D Kohl). Both active farmers and ranchers as well as non-operating landowners will be facing the transfer of land to the next generation.

Over the next five years, 10% of the 911 million acres of agricultural land in this country will change hands, which equates to 2% per year (USDA TOTAL Report). About 1% will change ownership each year through inheritance, gifting, or closed sales. The other 1% will be sold in the open market, which equates to about 4.25 million acres per year on average available for purchase.

Much of the current and upcoming transfer of land wealth is going to inheritors who will be first-time landowners. This segment of non-operating landowners is gradually growing due to the aging of farmers, ranchers, and the general population. As an example, non-resident ownership of Iowa farmland grew from 6% in 1982 to 21% in 2007 (M Duffy).

This next generation of landowner will typically be more removed from the farm or ranch and will be seeking information and guidance from various sources for making decisions. Family and personal dynamics will be factored into deciding whether to keep the farm or sell it.

Many times, outside expertise provided by an appraiser, farm manager, or a professional land broker becomes critical in the decision making process for the next generation of landowner. 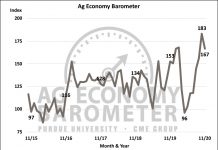