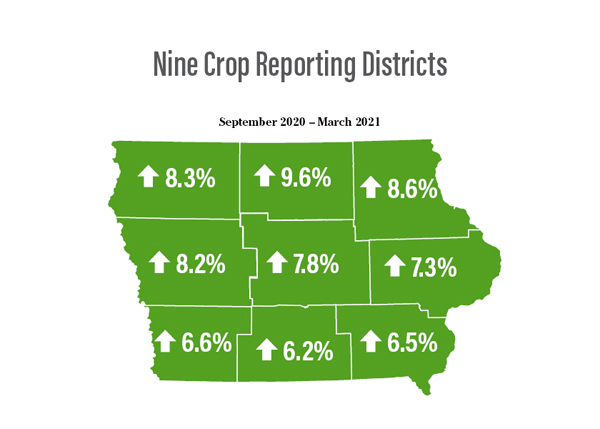 From September 2020 to March 2021, Iowa farmland values have posted a nearly 8% increase. This is following a period of 12 months that featured farmland values that were virtually unchanged across the state, according to a recent report from the Iowa Chapter of the Realtors Land Institute.

Of the nine crop reporting districts, the northern tier showed the greatest strength, ranging from an 8.3% to 9.6% increase in cropland values.

Matt Vegter and Elliott Siefert with the RLI Iowa Chapter say the factors driving this increase in values include:

• A surge in net farm income.
• Optimism driven by a rally in commodity prices and government payments in 2020.
• The continuation of low interest rates.
• A low supply of land for sale.

1031 exchanges are at play in a small portion of the farmland market, with 30% of respondents saying 11% to 20% of transactions have either a buyer or seller using the tool.

“Thus far, 2021 has been an incredibly active and competitive market situation across all the Midwest,” he says. “The recent land value surveys have actually started to reflect that market strength that we as land brokers and auctioneers have been anecdotally reporting in recent months.”

The most-recent report from the Federal Reserve Bank of Chicago shows a 6% year-over-year increase in Midwestern farmland values. That is the largest such gain since 2012. The region includes Iowa, northern Illinois, southern Wisconsin and the majority of both Michigan and Indiana.

Additionally, the 2021 report on farmland values in Illinois from the Illinois Society of Farm Managers and Rural Appraisers show a stable-to-increasing market. In the survey of farm managers and appraisers, 89% look for prices paid for farmland to increase during 2021, with 52% seeing increases of between 5% and 10% and higher.

“No doubt about it, this land market has shifted up from where it was from a year ago,” Hensley says. “We’re rapidly approaching another spring planting season with probably as much optimism in agriculture as we’ve seen over the past decade.”