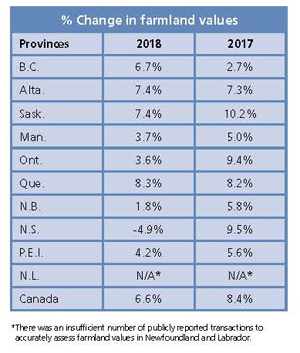 The average value of Canadian farmland increased 6.6% in 2018, according to the annual appraisal update of benchmark farms conducted by the large ag lender Farm Credit Canada (FCC).

While, higher, 2018’s increase is the lowest gain since 2010. The 2018 increase follows gains of 8.4% in 2017 and 7.9% in 2016. FCC economists say an estimated 1% reduction in net cash receipts was likely a negative factor in farmland values in 2018 and a decrease in the number of farm properties offered for sale was likely a supportive factor.

In all provinces except Nova Scotia, average farmland values increased. Quebec experienced the highest average increase at 8.3%, followed by Saskatchewan and Alberta, both at 7.4% and British Columbia at 6.7%. The rest of the provinces were below the national average with Prince Edward Island’s average increase at 4.2%, Manitoba at 3.7%, Ontario at 3.6% and New Brunswick at 1.8%. Nova Scotia recorded a decrease in average farmland values of 4.9%. Note that in Newfoundland and Labrador there were not enough publicly reported transactions to fully assess farmland values.