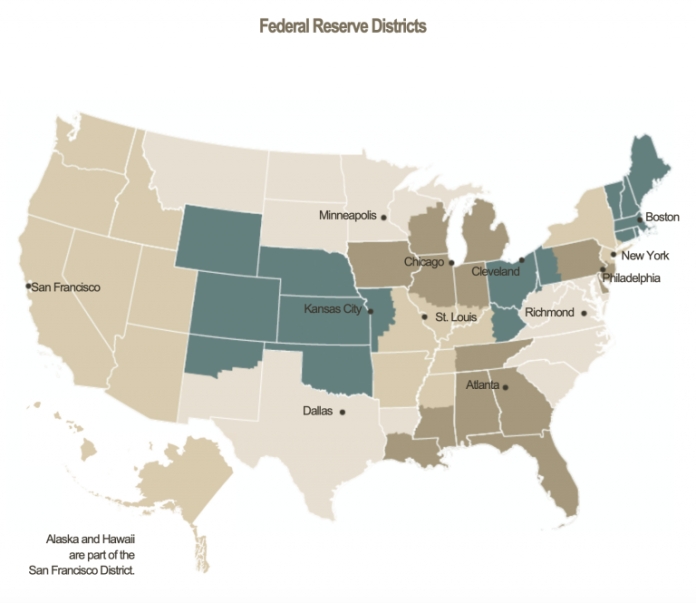 On Wednesday, the Federal Reserve Board released its October 2021 Beige Book update, a summary of commentary on current economic conditions by Federal Reserve District. The report included several observations pertaining to the U.S. agricultural economy.

“On a year-over-year basis, production forecasts for corn, soybean, peanut, and cotton crops were up while rice and sugarcane forecasts were down. The USDA reported year-over-year prices paid to farmers in August were up for corn, cotton, soybeans, cattle, broilers, and eggs, but down for rice and milk. On a month-over-month basis, prices were up for corn, rice, cattle, broilers, and eggs but down for cotton, soybeans, and milk.”

* Seventh District- Chicago– “In spite of drought in some areas, corn and soybean harvests in the District were larger than expected and near record levels. More plentiful supplies of both crops were putting downward pressure on prices. That said, corn and soybean prices were higher than a year ago. Cattle prices were flat, while milk prices recovered some. Facing higher feed costs, dairy farm margins tightened.

Rising energy prices and logistical problems were creating concerns about the cost and availability for 2022.

Luke Worrell provided an overview of some of the key farmland value findings from a recent survey of the #Illinois Society of Professional Farm Managers and Rural Appraisers during Thursday’s farmdoc webinar (90 second clip).

“Cash from government programs and product sales were holding back demand for agricultural lending.”

* Eighth District- St. Louis– “Agriculture conditions have slightly improved since our previous report. Overall crop yields have increased moderately over the previous year. Contacts are very optimistic about the current conditions in the District. Farmers have reported a strong harvest season combined with high prices, which have contributed to a strong season overall. Hurricane Ida caused some slight delays but was not a major disruption to the District’s agribusiness. There is, however, some concern about rising input prices, global supply chain disruptions, and the lack of labor necessary for both low- and high-skilled agriculture work.”

* Ninth District- Minneapolis– “District agricultural conditions deteriorated somewhat since the previous report. While producers continued to benefit from solid commodity prices, most of the District remained in severe or worse drought condition. Yields and production of wheat and other small grain crops in District states for 2021 will be sharply lower than the previous year.

“Most of the District’s corn and soybean crops were rated in fair or poor condition.”

farmdoc’s Gary Schnitkey noted in Thursday’s webinar, that even with higher input costs, based on a $4.50 (#corn) and $12.00 (#soybeans) prices, operator and land returns would still be above cash rents going into 2022 (clip, 90 seconds). pic.twitter.com/JaRxaXsdYE

“Some contacts also noted a desire to hold larger inventories of inputs over the coming year.  Weakness in the cattle industry persisted as concerns about drought and higher input costs intensified.  Low cattle prices continued to limit profit margins for ranchers.”

* Eleventh District- Dallas– “Soil conditions remained mostly adequate in Texas, though drought conditions persisted in parts of southern New Mexico. Crop conditions were quite favorable, boosting expectations for substantially higher production this year than last across a variety of crops, including cotton, sorghum, and corn. Agricultural prices generally softened slightly over the reporting period. Pasture conditions were fair to good, and promising soil moisture conditions for the planting of winter wheat increased optimism for crop performance.”

* Twelfth District- San Francisco– “Conditions in the agriculture and resource sectors strengthened somewhat. Demand for the regions’ agricultural products continued to be robust both domestically and internationally. Crop yields on tree fruit, wheat, and grapes were lower due to warmer temperatures and water shortages. A few contacts reported farmers leaving a portion of their acreage fallow to use water on more profitable crops. As a result, some fruit inventories were reduced. Several contacts noted price pressures coming from increased transportation and labor costs. Some producers in the Pacific Northwest highlighted that labor shortages led them to hire most of their seasonal workers through the temporary workers visa program as opposed to locally. Supply chain disruptions and shipping delays continued to weigh on producers with one contact reporting about 25 percent of orders being unshipped.”

The Importance of Off-Farm Income to the Agricultural Economy