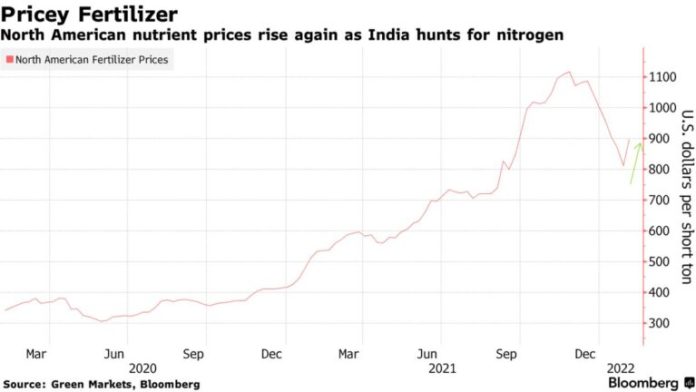 Bloomberg writer Elizabeth Elkin reported on Friday that, “North American fertilizer prices rose the most in almost five months this week as a global competition for supplies means farmers could still have a ways to go before seeing relief from high nutrient costs.

“The Green Markets North America Fertilizer Price Index jumped 11%, the most since the week ended Sept. 10. India, the world’s largest importer of the popular nitrogen fertilizer urea, is looking to buy product later than usual. That will increase competition for nitrogen in the first quarter of 2022, when the U.S. and Europe are looking to buy, said Alexis Maxwell, an analyst for Bloomberg’s Green Markets.”

Elkin pointed out that, “Though prices in the U.S. have dipped off records, they remain high. That’s adding to costs for farmers and prompting some to curb fertilizer usage, threatening to curb crop yields and further raise global food prices that are near a record high.”

With respect to fertilizer use, Amie Simpson reported last week at Brownfield that, “Some farmers are planning to adjust nitrogen application plans because of rising input prices, according to the latest Purdue University/CME Group Ag Economy Barometer.

“Jim Mintert is the director of the Purdue Center for Commercial Agriculture.

‘Roughly four out of 10 corn producers in the survey said that they were going to reduce their nitrogen application rate in 2022 compared to what they used in 2021,’ he says.

Meanwhile, Reuters writers Rod Nickel and Polina Devitt reported last week that, “Nutrien Ltd, the world’s biggest potash miner, could boost production by up to 29% in coming years, depending on any sanctions facing rival producers in Russia and Belarus, the Canadian company’s interim CEO told Reuters.

“Prices of granular potash fertilizer are near 10-year highs in the United States and Brazil, helped by Western economic sanctions against Belarus. Russia, home of Uralkali and EuroChem potash mines, faces possible economic sanctions if it invades Ukraine.”

“Saskatoon, Saskatchewan-based Nutrien could restart up to 4 million tonnes of idled annual capacity in that Canadian province in coming years as it assesses the long-term outlook for sanctions against competitors, interim Chief Executive Ken Seitz said in his first interview since his promotion in January.”