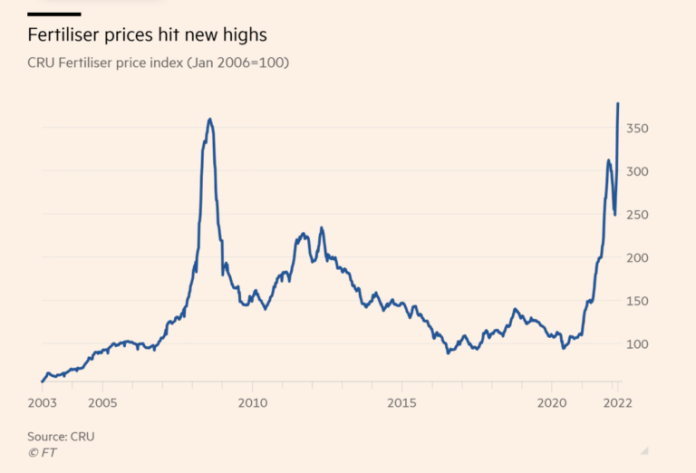 Emiko Terazono reported yesterday at The Financial Times Online that, “Fertiliser prices are breaking new records as supplies from Russia, the leading exporter, has dwindled, adding further to fears over food security.

“Russia’s export ban this month — including key crop nutrients containing nitrogen, potash and phosphates — has sent prices soaring, while farmers were already facing high fertiliser costs because of sanctions on Belarus, a leading potash producer and export restrictions by China.”

Terazono stated that, “The fertiliser index from CRU, a consultancy, has risen 30 per cent since the start of the year, and is now higher than the levels reached during the food and energy crisis when prices jumped in 2008.”

The Post article pointed out that, “Jed Bower farms corn and soy in southwest Ohio. He is hoping to start planting this year’s crops the second week in April, but he’s nervous not just about the prices of the chemicals he needs, but also about their availability.”

Reiley added that, “Wheat futures are up 29 percent since Feb. 25, with corn up 15 percent since that date, soybeans up 6 percent and other commodity grains dragged along with them.”

“Wheat prices are rising as some of the world’s biggest importers seek supplies from alternative shippers after Russia’s invasion of Ukraine choked exports from the Black Sea.”

The Bloomberg article explained that, “India is in final talks to begin wheat shipments to Egypt, the biggest buyer, and is also in negotiations with China and Turkey. Other big importers, including Algeria, Jordan and Morocco, are likely to stay on the lookout for new purchases in order to maintain their domestic stockpiles at reasonable levels.

“While wheat cargoes are coming out of Russia, trade from Ukraine is at a near standstill.”

Also yesterday, Financial Times writers Heba Saleh and Emiko Terazono reported that, “Although grain prices have come down from the record highs hit immediately after the Russian attack, uncertainty surrounding exports from both countries have kept wheat prices two-thirds higher than a year ago. Sharp spikes in food prices are closely linked to social instability. A food crisis in 2007-08 caused by droughts in key wheat and rice-producing countries and a surge in energy prices led to riots in more than 40 countries around the world.

“The UN International Fund for Agricultural Development said the impact of rising food prices and crop shortages was already being felt in the Middle East and north Africa. ‘This could cause an escalation of hunger and poverty with dire implications for global stability,’ said Gilbert Houngbo, IFAD president.”

Global prices of wheat and barley went up 31% over the past year. In Feb, food prices were at record high due to high demand, transportation costs & port disruptions. Volatile natural gas prices sent fertilizer prices soaring. All could lead millions more to face severe hunger.

As the impacts of the Russian invasion on commodity markets unfold, policy makers are stepping back to consider potential adjustments to counter the sudden change in supply and demand equilibrium.

Reuters writers Kate Abnett and Philip Blenkinsop reported yesterday that, “The European Commission is set to delay the publication of proposals on sustainable farming and nature that were expected this week, with the impact of the war in Ukraine on food supply leading some countries to question the European Union’s environmental push.”

Abnett and Blenkinsop noted that, “The EC will put forward measures to deal with the impact of Russia’s invasion of Ukraine, which has driven up prices of wheat and barley, and raised fears of shortages.

One proposal will be to allow cultivation on land lying fallow, a practice that allows the environment to recover between farming cycles.

And Bloomberg writer Jorge Valero reported yesterday that, “The European Union will for the first time tap an agricultural crisis fund to cushion the impact of the ongoing war in Ukraine on food producers facing high energy prices and shortages of some key products.

“The European Commission on Wednesday will propose using the fund’s nearly 500 million euros ($551 million) to support European farmers as part of a package to tackle the fallout of the invasion on the agricultural sector and to ensure food security in the bloc, an EU official said.”

And a separate issue regarding the cash market for wheat, stemming from the sudden jolt in prices, continues to develop.

“Local prices shot up roughly 30% to nearly $12 a bushel, about the highest Ehmke could recall in 45 years of farming near the western Kansas town of Healy.

Instead of reaping a windfall, Ehmke found a commodities market turned upside down. He and his wife Louise told Reuters they couldn’t sell a nickel of their upcoming summer wheat harvest for future delivery. Futures prices for corn and wheat had rocketed so abruptly that many along the complex chain of grain handling – local farm cooperatives, grain elevators, flour millers and exporters – stopped buying for fear they couldn’t resell at a profit.

The Reuters article pointed out that, “Meanwhile, the inability to sell some of their winter wheat – whose harvest starts in June – is putting the squeeze on U.S. farmers. Growers like the Ehmkes need cash now to pay for seed and fertilizer ahead of spring planting, as well as for land rent and tax bills coming due.”