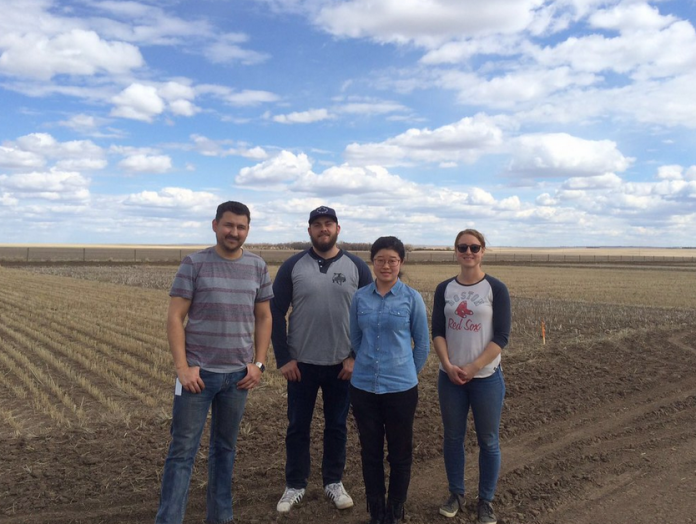 Researchers recently moved science one step closer to finding the “sweet spot” for phosphorus fertilizer use. Using the Canadian Light Source at the University of Saskatchewan (USask), the team used light millions of times brighter than the sun to gather highly detailed information about how fertilizing with nitrogen and phosphorus change the chemistry of soils and the availability of phosphorus for crops.

The group examined soil from long-term plots at Agriculture and Agri-Food Canada’s Swift Current Research and Development Centre near Swift Current, Saskatchewan. They studied soil from plots that were established in 1967, with a fallow-wheat-wheat rotation, and which had received a fixed amount of phosphorus since 1967, with or without nitrogen fertilizer. They also looked at sub-plots where phosphorus fertilization was stopped in 1995 but with no change in nitrogen fertilization (with or without nitrogen fertilizer). Their study, published recently in Geoderma, was part of a PhD thesis project by researcher Shuo Chen from China Agricultural University in Beijing.

The team found that long-term fertilization practices—in particular, the use of nitrogen fertilizer—have changed the soil chemistry in these plots, which has in turn changed the chemical forms of phosphorus and the ways phosphorus cycles within the soil. In particular, adding nitrogen fertilizer reduced the soil pH (making the soils more acidic). This binds the added phosphorus fertilizer more tightly, making it less available to crops.

“Soil pH and organic matter—which contribute to good soil health in general—had the largest influence on the forms of phosphorus in soil and the processes these phosphorus forms undergo within soil,” said Dr. Barbara Cade-Menun, a researcher with Agriculture and Agri-Food Canada and collaborator on this study. “For producers, the key to optimal cycling of phosphorus is ensuring their soils have sufficient organic matter and a neutral pH.”

To identify the chemical forms of phosphorus present in soil at a molecular level, the team used the Saskatchewan Structural Sciences Centre (SSSC) at USask and the SXRMB beamline at the CLS. Cade-Menun said the high-tech equipment was essential to the team’s work.

“The SSSC let us look at phosphorus that is bound to carbon,” said Cade-Menun. “The CLS allowed us to look at the inorganic side and answer questions like ‘Is the phosphorus bound to calcium, iron or aluminum?’ and ‘How are these forms shifting with different fertilizers?’”

“These advanced tools allow us to know precisely what is going on in the soil,” she added.

The group’s results point to the need to dig deeper to fully understand the specific role that pH and organic matter play in how phosphorus cycles in soil. This includes studying other crop rotations with different fertilizer rates, such as lentil-wheat rotations, as well as other plots with long-term nitrogen and phosphorus fertilizer experiments in other provinces, including Manitoba and Quebec.

Everyone benefits when producers get maximum crop yields while using the least amount of fertilizer and keeping soils healthy. “I don’t think anybody would argue with wanting to grow crops that are healthy and to optimize our production because the consumer benefits. But we want to do that in the most cost-efficient and environmentally sustainable way,” said Cade-Menun. “And that means balancing what the crop needs with making sure it has just enough, but not too much, fertilizer.”