The problems facing America’s farmers in 2018 are as diverse as their crop varieties: Labor shortages. Soil health. Food spoilage. Trade wars. Lack of access to data on seed pricing, yield information, and even commodity forecasting.

The good news? There is a veritable army of technologists and entrepreneurs working hard to solve these issues-and an army of investors seeking to fund them. In 2017 alone, ag-tech funding through investment or acquisition increased 32% to $2.6 billion, and half of the top 20 deals in the space exceeded $50 million. One of the year’s highlights included the multi-billion-dollar multinational DowDuPont DWDP +0.67%’s acquisition of software startup Granular for $300 million.

The bad news? There is now so much money flowing into the space and so many entrepreneurial solutions coming to the market that it’s harder than ever to cut through the noise.
To that end, Forbes has taken to the fields and phones to come up with the top 25 most innovative startups in the ag-tech space. Just as we did last year, we surveyed the agricultural technology landscape by speaking with experts, venture capitalists and accelerators; then we examined financials and each company’s agricultural credentials. A special thanks goes to Seana Day at the Mixing Bowl for her comprehensive research on the ag-tech environment.

This year’s list features 12 alumni and 13 newcomers; the high degree of turnover is due in part to mergers and acquisitions, and also to a number of companies making big gains in both technology and dollars.

Here, in alphabetical order, is the fruit of that labor:

Apeel Sciences: Apeel is extending the shelf life of America’s produce by using lipids from fruits and vegetables to create an extra “peel” for avocados and citrus to slow the rate of spoilage-causing oxidation and water loss. Ag cred: Launched its longer-lasting avocados in Costco and Harps Food Stores earlier in June; counts the Bill and Melinda Gates Foundation as one of its earliest backers.

Aquabyte: Teach a man to fish, and you feed him for a lifetime. Teach a computer to farm fish and you might feed the world. That’s Aquabyte’s hope, anyway-it uses computer vision hardware and AI software in fish farms to monitor food consumption, thereby minimizing waste and saving money. Ag cred: Aquabyte has raised $3.5 million with investors including New Enterprise Associates, Costanoa Ventures and Princeton University.

Bext360: Bext360’s blockchain software keeps track of commodities like coffee by identifying and making an electronic token for each one. This unique ID enables the company to trace it through the entire supply chain. By tokenizing commodities, the company is also able to provide payment to farmers up front. Ag cred: The company has raised over $3.35 million to date and is working with partners like Coda Coffee and Great Lakes Coffee.

Bright Farms: This indoor farming outfit aims to help consumers buy local produce by building greenhouses in the communities it serves. So far, this strategy has resulted in leafy greens that take 80% less water, 90% less land and 95% less shipping fuel than lettuce that is grown out west and shipped east. Ag cred: Supplies some of America’s largest grocers, like Walmart, ACME, ShopRite and Giant.

California Safe Soil: The startup with $14.8 million in funding transforms wasted food from supermarkets into a low-cost liquid fertilizer that it sells to farmers in an effort to combat declining arable land worldwide. Ag cred: The company claims the process is 720 times more efficient than composting, which usually takes around three months to complete.

CiBO Technologies: Field trials of new farming techniques are expensive and time consuming, so CiBO is making the process virtual. It uses data analytics, statistical modeling and artificial intelligence to simulate field trials and agricultural ecosystems under different variables, like weather conditions, so farmers, growers and even public policymakers can improve processes more quickly. Ag cred: Raised $30 million in its Series B round of funding for a valuation north of $100 million.

Clear Labs: Former software engineers and genomic scientists launched this food safety startup in 2014 with an aim to help brands make sure their suppliers are selling what they advertised, while also testing for allergens and other contaminants. Ag cred: More than $24 million in funding comes from Silicon Valley elites including Khosla Ventures, Menlo Ventures and Alphabet’s GV.

Concentric: Concentric focuses on making “microbial consortia”-combinations of bacteria and fungi that, when put together, improve crop yields while decreasing the need for fertilizers and pesticides. Ag cred: The company has raised over $64 million to date, from investors such as Pontifex AgTech and TPG Capital.

EIO Diagnostics: The global dairy business loses $10 billion worth of production every year due to undetected udder infections. Young startup EIO Diagnostics is helping catch these infections using multispectral imaging on iPad-like devices that can be handheld or mounted on automated milking machines. Ag cred: It’s a member of the Yield Lab accelerator, which has in its portfolio the likes of Arvergenix and AGERpoint.

Farmer’s Business Network: With a network of more than 6,500 farms that pay to access its database of seed prices, yields and marketing information, FBN is one of the most dominant forces in the ag-tech space. The company is projecting $200 million in revenue this year, nearly three times its 2017 top line. Ag cred: GV, T. Rowe Price and Kleiner Perkins are among the investors that have given FBN nearly $200 million in venture funding. (For more on FBN, see Amy Feldman’s June profile of the company.)

FarmLead: The grain trading industry is taking a hit as commodity farmers sign up with FarmLead, an online marketplace for grain that eliminates the need for middlemen like Cargill and Archer Daniels Midland ADM +0.75%. Buyers and sellers can register for free, deals are negotiated anonymously, and broker fees are reduced. Ag cred: Funding tops $7 million; investors include Monsanto MON +0% Growth Ventures.

FoodLogIQ: 7,000 food companies around the world depend on FoodLogIQ’s supply chain analytics to ensure their products are safe to consume. After securing a fresh $19.8 million in financing from investors (including Tyson Foods TSN -0.39%’ venture arm) in March, FoodLogIQ recently announced a blockchain pilot that will further enhance its traceability technology. Ag cred: Counts Whole Foods, Chipotle, and Subway as customers.

Indigo Agriculture: Using machine learning and data analytics, Indigo agriculture has compiled a database of which types of microbes work best to promote higher crop yields. The company sells seeds coated with those microbes to farmers to improve the health of plants and increase yields. Ag cred: Indigo has raised over $370 million to date.

Pivot Bio: Before the advent of chemical fertilizers, microbes in the soil would provide nitrogen to crops. Using a proprietary process, Pivot has figured out a way to reawaken the genes of those microbes, enabling crops to be fertilized without the need for chemicals. Ag cred: Over the past year, Pivot has doubled the number of employees and expanded its leadership team to include a number of industry veterans.

Plenty: Plenty is an indoor farming company utilizing machine learning, artificial intelligence and crop science to optimize yields and give produce exactly what it needs to achieve optimal freshness and taste. Ag cred: Bezos Expeditions, SoftBank Vision Fund and the Data Collective are among investors that have given Plenty and its vision $226 million in venture funding.

Produce Pay: This supply chain startup with $12.5 million in funding connects wholesale buyers with produce sellers. The platform fixes cash-flow problems by paying for product the day after it is shipped, rather than the typical 30-to-45-day waiting period. Ag cred: ProducePay has provided liquidity to over 200 farmers and 50 distributors, financing over $500 million of produce in its 3 years of operation.

Soft Robotics: Soft Robotics is exactly what it says on the tin-the company manufactures robotic arms with soft grippers that can be used to gently handle delicate items like fruits and vegetables in processing facilities. Ag cred: The company has raised over $50 million to date and counts Taylor Farms among its customers.

Taranis: This Israeli precision agriculture company uses data science and learning algorithms to help farmers manage more than 20 million acres. In May, Taranis announced that it was acquiring Mavrx, a leading agriculture aerial imagery provider (and member of the 2017 Most Innovative AgTech startups list). Ag cred: Counts Marc Benioff as an angel investor; later-stage investors that have contributed to its $10 million in funding include Vertex Ventures and Finistere Ventures.

Terviva: An Oakland-based company that is cultivating the pongamia tree, which is native to Australia and India, in Florida, California and Hawaii. The trees produce an oilseed with 10 times more yield than soybeans and have the potential to create a biofuel alternative. Ag cred: Startup has raised more than $20 million.

Trace Genomics: This machine learning startup uses genomic sequencing technology to work with farmers to identify pathogens that may be lurking in their soil, providing an advantage in maximizing yields and preventing crop diseases. Ag cred: Trace Genomics has worked with major growers like Driscoll’s, and according to Pitchbook has raised nearly $20 million to date.

Understory: Madison, Wisconsin-based Understory makes weather sensors for farms that collect hyperlocal weather data, particularly hail, wind, precipitation, and temperature. The company’s sensors have no moving parts and are solar-powered. The company also provides a real-time data platform and an API solution. Ag cred: Understory is collaborating with Monsanto, which is using its sensors in test fields in Argentina and Hawaii. 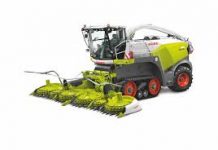