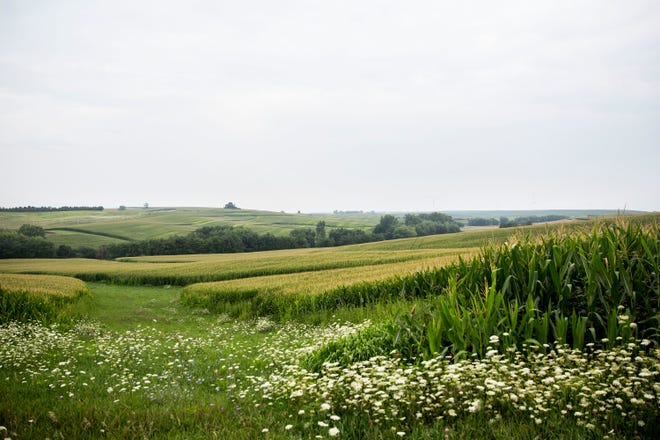 An Iowa family known for hosting late Soviet leader Nikita Khrushchev on their farm during the Cold War, and for their land stewardship, fetched a hefty $19.3 million for 2,000 acres sold at auction Tuesday, even with permanent conservation easements tied to the farmland.

“It’s a big, big thing that farmers bought the land,” Bruere said Tuesday. “That tells me they understood the easements and were comfortable with the practices.”

The Garsts stipulated that the buyers carry on the family’s efforts to build soil health and prevent erosion. Over three generations, the family has adopted land-management practices that include no-till farming, planting annual cover crops, and adding and maintaining terraces, waterways and headlands.

Bruere said it’s hard to calculate how much the conservation easements, given that cropland values are climbing in Iowa and likely will exceed highs seen in 2012 and 2013. Easements can lower land’s value because they place restrictions on how it’s used.

He said the Garsts’ tillable farmland – used to raise corn and soybeans – brought in $11,461 an acre. Given recent sales, he sees cropland selling for $12,000-$12,500 an acre, meaning the land went for a 5-10% discount. Other farmland benchmarks, however, indicate the difference was not significant.

Overall, including acreage that has been placed in federal conservation programs, the Gast land in Carroll, Greene, Audubon and Guthrie counties averaged $9,641 an acre, Bruere said.

The sale attracted significant interest, given the Garsts’ roots in Iowa agriculture. Patriarch Roswell Garst, who died in 1977, introduced Pioneer hybrid corn seed in the western U.S. through the Garst & Thomas Hybrid Seed Co., founded in 1931. He later sold seed to the Soviet Union, forging a tie with Kruschev that led to his 1959 visit.

The family eventually split off Garst Seed Co., which would become part of the global agribusiness Syngenta through a series of mergers. The Garst seed plant in Coon Rapids closed in 2013.

Bruere said 27 people bid on eight parcels of land Tuesday that ranged in size from about 50 to 460 acres. Bidders had to win a spot at the auction by submitting sealed offers earlier this month. The 31 with the highest bids were allowed to participate.

Liz Garst, the family business manager, has said the family plans to have Whiterock Conservancy, a land trust with 5,500 acres her family donated near Coon Rapids, enforce the easements.

Some of the sale proceeds will be used to support Whiterock so it’s able to accept other families’ conservation easements to permanently protect their land management practices.