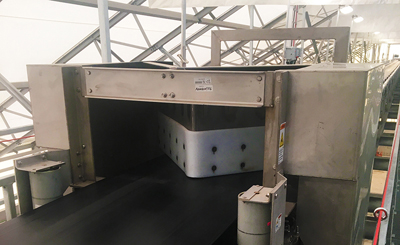 Nate Reznechek, crop nutrient equipment sales director for GSI, said the wedge-shaped device can replace a standard tripper conveyor because it is lighter, smaller and more cost-effective, with no loss in capacity. And, by maintaining an even pile peak, he said it is 20 to 30 percent more efficient than a drag conveyor by eliminating the voids in the product pile that occur between the gates.

Reznechek noted another major benefit is that the fertilizer plow requires a smaller building head-house, offering further savings in the construction of new facilities. He said the plow can also offer a competitive advantage by replacing conventional conveyor systems in existing fertilizer plants, as was the case at the North Central Grain Cooperative in Bisbee, North Dakota.

Joe Kremer, North Central Grain’s agronomy division manager, said the plow operates at 950 tons per hour, compared to 200 tons with the plant’s previous drag conveyor. “It’s really fast and can handle everything we throw at it,” he said. “It’s been a very efficient addition to our operation.”

Kremer noted the facility also operates a conventional tripper conveyor housed in a recent plant expansion. That system, he said, cost about three times more than GSI’s fertilizer plow conveyor, and because of the tripper system’s much larger footprint, it added more than $300,000 to the cost of the expansion project.
“We expect this plow technology to be a game changer in the fertilizer industry,” Reznechek said. “Facility owners are looking for innovative solutions like this that can deliver improved efficiency and cost savings for their operations.”