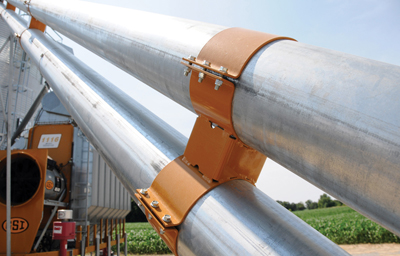 For bins that are already filled with fall-harvested grain, Woodruff, a GSI district manager, offers these recommendations:

• As soon as possible after harvest, pull peaked grain down so the center is just below the grain at the bin wall. The grain will look somewhat like an M from the side, promoting air movement in the center.

• Check the grain weekly or at least every two weeks. Don’t go into the bin, but climb to the top checking for a crust or any off smell.

• If you have a problem, aerate immediately, but more than likely, at least a good part of the grain will need to be moved or sold to stop the problem.

• As grain enters the bin, run the aeration fans and continue after it is full to help equalize kernel grain moisture. This usually takes 5 to 10 days, depending on the aeration level.

• Every 10 feet of grain depth in the bin, pull out about 300 bushels. This will create an inverted cone, removing a great deal of the fines that accumulate in the center and greatly improving aeration. Using a long chute distributor like GSI’s Agri-Dry eliminates the need for this.

• Pull peaked grain down to form an M to promote air movement as described above.

• Watch the ambient temperature and use aeration fans to get the grain temperature below 50 degrees as soon as possible. Nearly all insect and mold activity ceases below this temperature. An automated aeration control like GSI’s GrainVue is the best way to do this.

• Dried grain stores better than straight from the field. Unheated grain is “live” and viable, with all of the bacteria, mold and insects to cause out of condition grain.

Woodruff also encourages farmers to always consult their local ag university for area-specific recommendations since conditions vary widely, and what works in one state or area may not work in another.

“If the long-time storage rules are not followed, you are much more likely to see grain go out of condition. That not only leads to income loss, but also greatly increases the likelihood of a bin entrapment or other injuries,” Woodruff said.
For additional information, farmers can contact their dealer or visit www.GrainSystems.com.