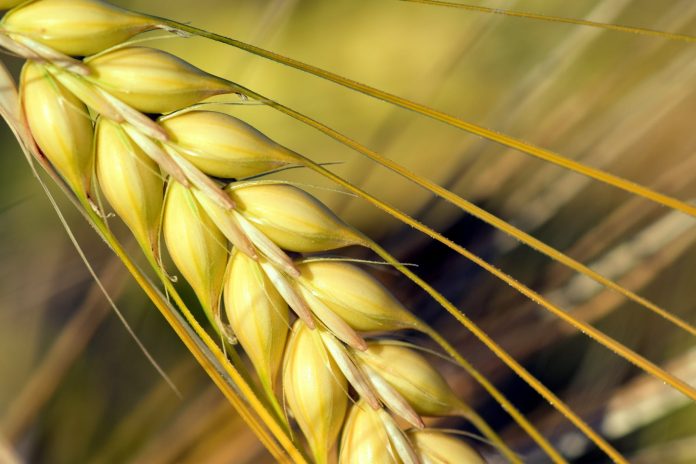 Weather has its fingers all over the 2021 malt barley crop.

Coffee shop complaining about the weather is a popular refrain, but in the view of Rick Redd, veteran of many malt barley campaigns, it’s not just hot air this year. The long-time regional manager for Briess Malt & Ingredients Co. at its Ralston plant had a one-word term for the weather which delayed spring planting for about two-thirds of the area crop. It was “crappy,” he declared.

“Hot one day, freezing cold and wet the next,” he recalled.

In mid-June, temperatures turned extreme in the other direction. Three straight days after June 15 hit 102 degrees. It was a stretch of unusually hot temperatures early and a preview to an intensely hot summer growing season.

Redd noted that the hot temperatures pushed growers to keep water on their fields.

“We are really blessed to have the water supply we do,” he emphasized.

“Nine out of 10 years, early-seeded barley performs better,” he affirmed.

From initial sampling, Briess still looks for a “good” crop of yields from 100 to 110 bushels per acre, Redd said.  That would be down about 15% from a year ago.

The first truckload of barley of 2021 was unloaded at the Ralston station on July 20. It was delivered by a Laurel, Montana, grower. Harvest of barley grown in southern Montana and the southern end of the Big Horn Basin is usually about a week ahead of most Powell area barley.

Deliveries from the Powell area usually kick in during the first week in August. This year the combines were in area barley fields about a week earlier than in a normal year, even before the end of the 2021 Park County Fair.

“This July heat has really pushed the crop ahead,” said Redd.

Redd noted that the number of Briess malt barley acres planted for delivery to Ralston are down somewhat “due to competitive prices.” He said growers of corn and wheat are being paid what he called “abnormally high prices” in 2021.

The COVID pandemic year of 2020 and its short-term impact on breweries, taprooms and bars is hopefully in the rear-view mirror, Redd said. The feared glut of malt in the supply chain which threatened to impact malt barley growers proved to be only a short-term concern.

“We understand that the COVID-19 impact on beer sales put everyone in a tough spot,” Redd said. “We want our growers to know how much we appreciate them and that they are a valued part of our company.”

Rick Redd has stepped down as regional manager for Briess at the Ralston receiving station. Since April, Redd is now part-time, serving as a consultant and outside adviser.

“I still work with the growers as needed,” he said.

His career in the grain industry in the mountain states goes back 46 years. Redd helped oversee design and construction of the Ralston plant for Anheuser-Busch in 1993. He moved to the area to become regional manager in 2005.

Anheuser-Busch sold to Riverland Corporation in 2010, who in turn sold to Briess in 2013. Riverland continued to operate for Briess until 2016 when the Wisconsin company assumed full operations.

In the transition of Briess management responsibilities at the Ralston station, a two-person team of Judy Bullinger and Cameron Barker is now in place.

Bullinger, office manager, has multiple roles for the malt barley company. She is in charge of contracts and payments to growers, as well as quality control — running sample tests on deliveries and determining which loads are accepted or rejected from growers. She is the accountant for all barley inventories and also interfaces with the railroad to order rail cars. She started working in the lab for Anheuser-Busch at its old plant in Powell in 1983 and added accounting with the opening of the new receiving station at Ralston.

Barker, new site manager at the Ralston receiving station, has been with Briess for eight years. He is in charge of running day-to-day operations at the plant.