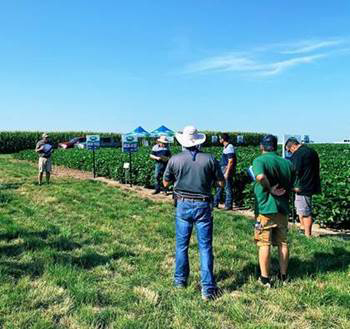 Some of the money, which was awarded to the Minnesota Department of Agriculture, will be distributed to 11 local project partners through the department’s “Bend, Don’t Break” initiative to advance their work in farm stress and rural mental health.

Farming has always been a hard job. Add the pressures of a global pandemic and a warming planet and it can start to feel like just too much.

Gary Wertish, president of the Minnesota Farmers Union, understands the toll that a career in agriculture can take on a person’s mental health. A former farmer who now rents his western Minnesota land to his son (“I still help out,” he said, with a chuckle), Wertish can tell stories about friends and neighbors who have struggled against the relentless pressures of making a living working the land or raising animals.

“Farmers are under a lot of stress,” he said. “You are dealing with a lot of things that are out of your control, like weather, market trade disruptions or livestock diseases. A lot of time these factors are out of a farmer’s control, and that can be hard on their mental health.”

Historically, farming culture has prized independence, Wertish said. Farmers and ranchers tend to be do-it-yourself people who’d rather not ask for outside help. When this do-it-yourself attitude extends to a farmer’s mental health, that can be a recipe for trouble.

Farming, Wertish said, “is a stressful occupation. Always has been. Always will be. Farmers are proud people. There are too many times that they think things that are actually out of their control are their fault. They put the blame on themselves, think they‘ve done something wrong. The vast majority of the time they haven’t. They don’t want to ask for help. It’s a struggle.”

An infusion of funds in the form of a $500,000 grant from the U.S. Department of Agriculture’s (USDA) National Institute of Food and Agriculture aims to help address the mental health struggles of Minnesota’s farmers. Some of the money, which was awarded to the Minnesota Department of Agriculture (MDA), will be distributed to 11 local project partners through the department’s “Bend, Don’t Break” initiative to advance their work in farm stress and rural mental health.

Meg Moynihan, MDA senior advisor, said that the USDA offered these grants to agriculture departments nationwide in recognition of the struggles faced by all American farmers.

“All states and territories were eligible for these funds,” she said. The funding’s source is the U.S. Congress’ pandemic relief bill. “There has been increasing understanding in Washington of the stress and mental health challenges the agriculture community has been up against in these pandemic times and then this summer with the drought.”

Moynihan, who runs a dairy farm with her husband about 10 miles west of New Prague in Le Sueur County, said she knows from personal experience the toll that farming can take on a person’s mental health. One year, after facing some life challenges, her own husband struggled with depression and anxiety.

Her husband has since recovered, but for Moynihan his experience combined with those of other she knows underscored the importance of supporting farmers’ mental health. She wrote the grant proposal that resulted in this most recent USDA award.

At MDA, Moynihan said, “We have doubled down on supporting people in agriculture. My position has been focused on supporting the human experience of agriculture — how do we respond when we see farmers and ranchers in trouble? What do we need to support them? It is such an important issue for us. We can’t ignore it.”

‘Enhancing the work we do already’

With its focus on supporting existing programs, Moynihan explained that the “Bend, Don’t Break” initiative aims to acknowledge and support the hard work already being done by local nonprofits and other organizations.

“We’ll be enhancing the work they do already,” she said. These organizations are embedded in the community and trusted by farmers and other rural community members; Moynihan explained. The idea is to shore up existing programs so they can continue to provide mental health support —  but at an enhanced scale.

Some of the grant money will go to support programs and educational institutions associated with tribes in Minnesota or indigenous food producers, including the Leech Lake Tribal College. The department also has formed a partnership with Big River Farms to support their farmer education program for minority and immigrant farmers.

One stress that many farmers face is finding, “competent, affordable legal help,” Moynihan said. With this barrier in mind, MDA will award a grant to the Farmers’ Legal Action Group to train attorneys in rural areas to be more versed in agricultural topics.

Too often, farm-related mental health crisis can result in suicide. Moynihan said that her department will distribute grant funds to local programs focused on suicide prevention. “We have some money going to the Minnesota Department of Health. We’ve worked with them on suicide prevention education in ag communities. They’ll be doing a series of psychological autopsies in Minnesota focused on cases of farmer suicide.”

Because rural residents often turn to members of the clergy in times of emotional or psychological distress, “Bend, Don’t Break” funds will support a suicide-prevention conference for rural faith leaders. “Church is not only a spiritual connection but also a social and emotional connection in rural communities,” Moynihan said.

Still more funds will go to support, among other programs, a network of “farm advocates,” individuals trained to support the specific emotional and financial needs of farmers and ranchers. “This is a group of 10 people across the state, former famers with good financial skills,” Moynihan explained. “They work with farmers who are experiencing a big challenge. They are not a neutral party. They are in the farmer’s corner. They help them prepare documents, prepare for meetings, find legal help and support for navigating farm programs.”

While farming has always been a stressful profession, the upheaval and strife of recent years has only raised the stakes. Even before the pandemic threw much of the world into disarray, many Minnesota farmers struggled to survive financially in the face of what Moynihan called, “persistently” low prices. Since around 2013-14, she explained, “They had a long slog of year after year of low crop and livestock prices, people scrambling to pay the bills, to pay off loans.”

For a farmer, coming up short financially can make it hard to get bank approval for the annual spring operating loan that’s often required to pay for feed and labor and is then paid off in the fall after harvest.

“We have people struggling to make those payments and lenders denying the operating loan,” Moynihan said. “This is a major source of anxiety and mental health worries.”

And other worries, like the increasing isolation that many farmers are experiencing — or the consolidation of rural schools, causing farm children to ride the bus for hours every day — pile on top of other, more front-of-mind concerns, Moynihan said.

“You peel it back and you begin to see inside the other layers of stressors. I have a friend who said, ‘When I moved to my farm 20 years ago I used to be able to see 15 farms from my window.’ Now there are so many fewer than that. You used to know more people who were in the same boat with you. Things are changing in rural communities.”

This physical isolation can make it hard for farmers and other rural residents to get the help they need for their mental health concerns. Wertish remembers a farmer he knew was struggling and wanted help: “He had to drive a couple of hours just to see somebody.” With the rise of telehealth and greater awareness of the importance of mental health, the situation is slowly beginning to improve in some communities, he said: “We’re still struggling to get mental health care in rural areas, but at least now there is an effort to find more professional help out where farmers are.”

Wertish believes that those efforts are part of a shift in attitude that he’s been witnessing among residents of Greater Minnesota’s farming communities. In the past, mental health struggles and even suicides were brushed under the rug, he said, but a more open attitude about mental health is making life better for everyone. By providing much-needed funding for programs designed to help farmers improve their mental health, “Bend, Don’t Break” could put people on a healthier path.

“This whole issue has been ignored for way too long,” Wertish said. He added that members of his organization, which supports and advocates for the state’s farmers, are excited about the opportunity provided by this grant: “We’re glad the Department of Agriculture is getting money to expand resources to help people find help.”

The more this kind of effort is made public, the better things can get, Wertish added. “We’re trying to get it out in the open. Lately there has been a lot of effort to provide some mental health help in farming communities. Now it is okay to talk about it,  but If you go back years, every one of us knew someone who was struggling. We weren’t always proactive enough to overcome that. But that’s finally changing.”