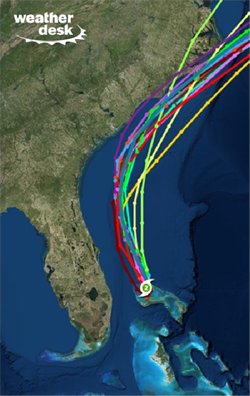 Over the weekend, Hurricane Dorian reached 185 mph and caused catastrophic damage to the Great Abaco and Grand Bahama Islands of the northern Bahamas. Currently, Dorian is a category two hurricane packing winds of 110 mph. It is expected to eventually turn northward and set its direction toward the Carolinas later this week.

“Even though Dorian is near stationary currently, it is expected to be pushed north by a trough of low pressure. This feature will help most of Florida stay clear of the brunt of the storm,” said Brad Harvey, Maxar’s Weather Desk Meteorologist.
Currently, the forecast has Dorian coming very close to the Florida coast over the next few days, bringing tropical storm-force winds, storm surge and heavy rain while the strongest winds stay offshore.

Since Dorian now has a higher likelihood of impacting the Carolinas, from an agricultural perspective, farmers will be watching the storm’s path closely as it could affect crops such as soybeans, corn and cotton. Some farmers in North Carolina have already started harvesting corn in advance of the hurricane.

From an energy perspective, power outages will likely occur with the storm, even with tropical storm strength winds. Local utilities are likely to have crews on standby in advance of the hurricane. In 2016, Hurricane Matthew took a similar path to Dorian. With that hurricane, Charleston, South Carolina had flooding with a seawall breach associated with the storm surge. Hurricane Matthew knocked out power for 680,000 homes in North Carolina and caused a shutdown of Interstate 95.

Dorian is likely not the last hurricane to percolate in the Atlantic basin this season. There will likely be a small tropical storm in the southern Gulf of Mexico later this week, but there is no threat to the United States with this particular system.
“Beyond this week, the climatological peak of the hurricane season is September 10,” said Harvey. “Conditions are ripe for more storms forming over the weeks to come.”