his is a presentation summary from the 2021 virtual Illinois Farm Economics Summit (IFES). A video of the webinar and PowerPoint Slides (PDF) are available here.

Corn and soybean prices have shown remarkable resilience in 2021. During the 2020-21 marketing year, nearby futures prices peaked in May 2021 at over $7.50 per bushel for corn and $16 per bushel for soybeans. This rally was caused by a surge in US exports coupled with production shortfalls in major growing regions outside the US. Since that time, prices for both crops have remained at historically high levels. As the calendar year draws to a close, the nearby futures price for corn remains near $6 per bushel and for soybeans near $13.

According to the December 2021 USDA World Agricultural Supply and Demand Estimates (WASDE), world corn and soybean production for 2021-22 are forecast to increase by 7.6% and 4.2%, respectively. US production is up in 2021-22 but larger production increases are occurring in other major exporters, especially Brazil and Ukraine which harvested relatively poor crops in 2020-21. China, historically the largest importer of soybeans and major importer of corn in 2020-21, is also expected to have increased domestic corn production by about 5%. Despite production increases, prices have remained relatively high because of robust consumption. USDA anticipates only modest increases in ending stocks-to-use ratios for 2021-22.  World stocks to use ratios for corn and soybeans are expected to be essentially unchanged between 2020-21 and 2021-22. US ending stocks to use ratios for corn and soybeans are forecast to increase slightly but remain below levels seen in 2019-20 when prices were substantially lower than they are today.

Current projections for relatively tight stocks-to-use ratios at the end of 2021-22 require exports through the remainder of the marketing year to match expectations. The current USDA WASDE forecast for US corn exports is 63.5 million metric tons or 2,500 million bushels. For soybeans, USDA forecasts US exports to be 55.8 million metric tons, or 2,050 million bushels.

Figures 1 and 2 present the current pace of US export sales and shipments for corn and soybeans respectively. In each graph, the orange line represents current 2021-22 marketing year committed sales plus actual exports up to December 9, 2021, or Week 15 of the marketing year. To consider whether this pace is sufficient to reach the USDA WASDE forecast level given by the gray line, we assume that future export sales in each remaining week of the marketing year follow the pace given by the previous 5-year average described by the blue line. 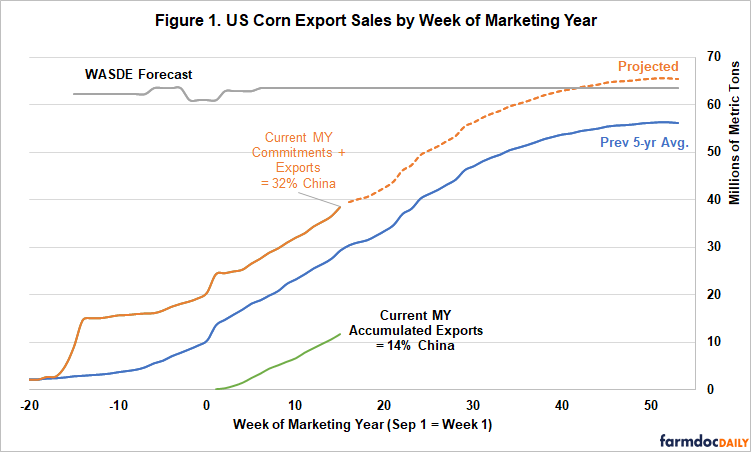 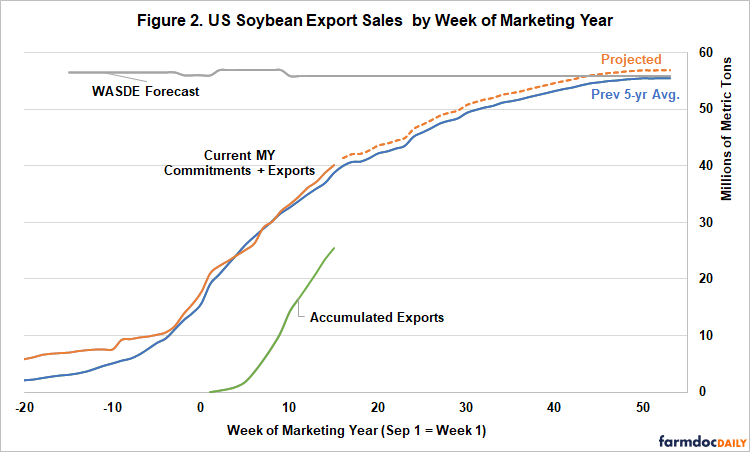 Both corn and soybeans entered the 2021-22 marketing year with relatively large quantities of committed export sales. In particular, China committed to significant purchases of US corn for 2021-22 delivery in May of 2021. These are the sharp increases in the orange line to the left of Figure 1.

Considering the pace of export shipments only, given by the green line in Figures 1 and 2, corroborates the idea that soybeans will meet export projections, but presents a cautionary note for corn. Accumulated export shipments have been much stronger for soybeans than for corn. Actual shipments of soybeans have moved faster than is typical in recent years, particularly after a slow start in early September when export shipments via US Gulf ports were slowed due to weather disruptions. This fairly brisk pace for actual shipments, particularly early in the marketing year when Brazil has yet to harvest its soybean crop, is solid evidence that US soybean exports are likely to meet expectations.

For corn, actual export shipments have been slower to materialize. This is evidenced by the relatively slow week-over-week increases in the green line in Figure 1. The main reason for the slow pace of exports relative to committed sales is China. While China is the destination for about one-third of total sales, only 14% of actual exports to date have been to China. If some export sales commitments to China fail to materialize, either in the form of cancellations or sales deferred to the 2022-23 marketing year, then the US will not reach the WASDE-projected level of corn exports.

Lower-than-expected corn exports would be somewhat bearish for both old-crop and new-crop corn prices. However, exports form only one leg of the three-legged stool of corn demand. Robust domestic ethanol and feed use of corn continue to underpin prices in the short run. The larger concern is that a combination of lower exports, higher ending stocks, and an increase in acres and production in 2022 would lead to prices for the 2022 corn and soybean crop that are closer to long-run average levels.

2022 Market Outlook For Corn And Soybeans, By Scott Irwin University of Illinois

Trends in Working Capital and Financial Solvency, By Bradley Zwilling