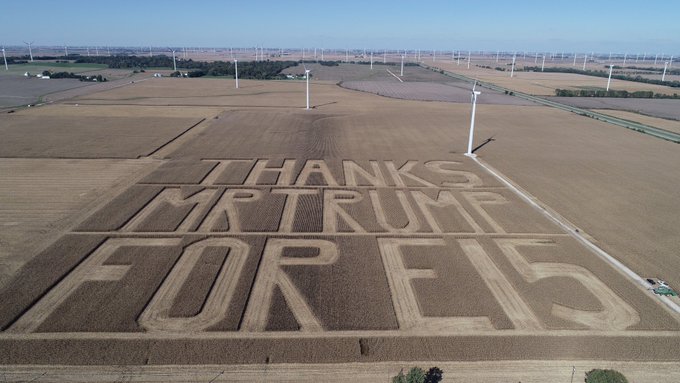 Some farmers in Indiana harvested a 60-acre thank you message to President Trump after he announced his decision to permit year-round sales of E15 gasoline.

The president made the announcement earlier this month at a rally in Council Bluffs, Iowa.

Bruce Buchanan, of Buchanan Family Farms, said Sunday on Fox & Friends that he and his fellow farmers wanted to express their gratitude to Trump in an “unusual way.”

The result was a monstrous corn maze message that reads “Thanks Mr Trump For E15.”

Buchanan called the experience of creating the thank you to the president “incredible.”

“We literally mechanically harvested the corn as we proceeded to spell out the letters in the maze,” he said.

He added that Trump has “certainly” delivered on his promises to the farming community.

“The future is very instrumental on people like President Trump,” he said.

Watch the interview from Fox & Friends above.