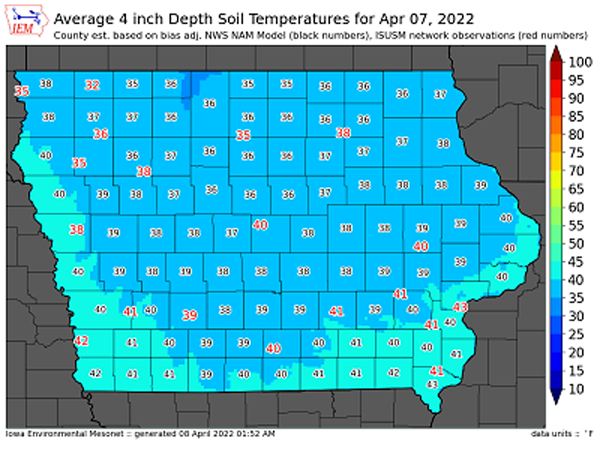 One way farmers can keep track of soil temperature in their county and across the state is by using the soil temperatures map compiled by the Iowa Environmental Mesonet at Iowa State University. Updated daily in the spring, this map provides current and historical soil temperatures for each county in Iowa.

“The 4-inch temperature is one of the key indicators that we use to indicate if soils are warm enough to plant corn and soybean,” said Mark Licht, assistant professor in agronomy and cropping systems specialist with Iowa State University Extension and Outreach. “The map provides averages that can help inform producer decisions.”

Licht said some fields may be warmer or cooler than what appears on the map, but he said it’s a good reference for making assumptions about different counties and regions of the state. As of April 7, soil temperatures ranged from 46 F in southern Iowa, to as low as 33 F in the north.

Daily fluctuations are common, especially in early spring. Historically, the optimum planting window for Iowa corn has been April 11 to May 18, with a shorter window in the northern part of the state compared to the south. The risk for a heavy frost (temperature below 28 F) remains above the 50th percentile until about mid-April.

“We want to make sure that we have a soil temperature that is warm enough for the seed to germinate and also for the shoot to emerge, without having to worry about heavy frosts,” said Licht. Planter in action.

Although farmers can plant whenever they like, doing so under 50 F increases the chances of damage to the seed and plant, and the potential that replanting may be necessary. Farmers who want to take advantage of the replanting provision in their crop insurance should not plant before April 11.

“Planting early ensures you will not be planting late, but it does not mean that you will not experience damage or have to replant,” said Licht.

In addition to the current soil temperature, Licht said farmers should pay attention to the forecast and where the trend is headed. A cooling trend with a strong chance of precipitation should be avoided. The forecast should call for temperatures to remain steady or to increase after planting.