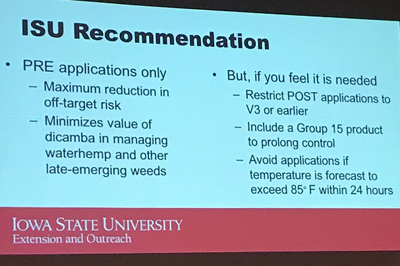 ISU Extension weed scientist Bob Hartzler says the volatility of those products is still a big concern, which is why they continue to recommend pre-emergence applications only.

“Those are made early in the spring when temperatures are cooler, and so there’s less likelihood of the volatility,” Hartzler says. “The problem with that and why nobody wants to go that route is it just destroys the value of the dicamba in managing waterhemp. That’s what 95 percent of the growers want out of the technology.”

If post-emergence applications are necessary, Hartzler says, they should be done as early as possible.

“The current label allows up to R1. We’d like to see it done before the V3 stage,” he says. “That’s usually going to be cooler temperatures and plants outside of the field are going to be at a less susceptible stage. So I think it’s going to be a lot safer.”

Hartzler says a Group 15, layered residual herbicide can be added to control late-emerging weeds. He also recommends holding off if the temperature is forecast to exceed 85 degrees within 24 hours of application.

Hartzler spoke with Brownfield at this week’s Integrated Crop Management conference in Ames. 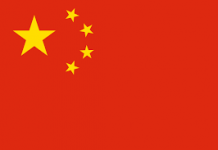