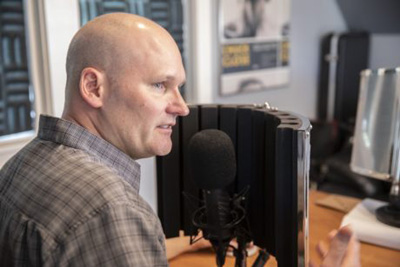 Source: blog by the editors of The Furrow Magazine

Telling stories with audio technology is as old as radio itself, but the popularity of podcasting is proof the format is not outdated.

That’s why The Furrow Magazine, a print and web-based publication that’s almost as old as radio, is now using podcasts to share stories with Deere fans.

The podcast series called “On Life & Land” gives readers (now listeners) a chance to hear from people who are featured in The Furrow’s stories, which typically relate to John Deere and/or agriculture.

The first podcast titled “The Great War: Ag in the Aftermath” debuted around Veteran’s Day 2018. Since then a new podcast has been added every two weeks. Each is made available through Apple Podcasts and links can be found on The Furrow website or the Homestead Magazine site, another Deere publication.

Two of the most recent podcasts feature interviews with Colleen Gerke – a former Deere employee who started a winery called Jowler Creek in Platte City, Missouri – and Neil Dahlstrom, manager of the John Deere Archives in East Moline, Illinois.

Dahlstrom’s interview even explains the origins of The Furrow magazine and Deere’s debut into content marketing in the 19th Century.

But these, of course, are stories that could still be told in print, so why start On Life & Land now?

“It feels like as a medium (podcasting) only came into its own in the last three years,” said David Jones, manager of agriculture publications at John Deere. “For sure, it (the success of other podcasts) is something that we’ve been paying attention to.”

Jones said the idea of doing podcasts was something previously suggested to The Furrow editorial team, but it wasn’t until a Q&A session with Deere employees last year – where someone again suggested it – that the team decided to run with the idea.

He said recording interviews with the people featured in an “On Life & Land” podcast story gives listeners a chance to experience a greater sense of the people being interviewed than they would from a print article alone.

And unlike most articles, the podcasts aren’t limited to a certain length or word count.

“The great thing about the podcasts is that we can go as long as we can hold our readers’ attention,” Jones explained. “It lends itself to telling stories.”

Setting the Scene
The On Life & Land team (l-r) is comprised of recording engineer Nate Werner, co-host David Jones, co-host Chad Wagner and co-host Chrissy Taylor.
Each podcast begins with Jones and members of The Furrow editorial team introducing both the topic and the people they will be interviewing. The idea is to provide a casual introduction, an approach they found in other popular podcasts.

Jones explained that before the team conducted their first recordings they listened to other podcasts to get ideas for what they wanted them to sound like.

“Four of us on the podcast team each did some studying on our own,” he recalled. “We brought in examples of podcasts we like and shared them.”

The Furrow editorial team is comprised of Jones, six full-time freelance writers and another two to three occasional contributors, he said.

To get started, Jones said team members had to make a small investment in recording equipment to take with them on interviews. The Furrow editorial staff is spread out over the U.S. and Canada, so they’re not all centrally located, and many of the people they’re interviewing aren’t able to make it to The Furrow’s recording studio in Olathe, Kansas.

“We put together a small shopping list for folks on the field team to give them some of the capabilities we have in the studio in Olathe, Kansas,” Jones said.

As for conducting the interviews, Jones said there wasn’t any special training necessary.

“We’re relying on our instincts as storytellers and certainly on the editorial field team,” Jones said.

Some of the other topics “On Life & Land” has covered include the dangers of depression for rural residents, a small dairy farm that became a successful farm-to-market business, and agriculture law – an interview in which they speak to an attorney about issues such as hunting leases and choosing an attorney.

Jones said the story about depression was particularly impactful as a podcast because one of the subjects they interviewed was struggling with depression at the time.

“That kind of thing just would not have come through in a printed story,” he noted.

The On-Air Talent
Those featured on the podcasts speak of how enjoyable the experience was and how they, too, see the many advantages of telling the stories over-the-air.

“The interview experience was great,” Gerke said. “The editors were so down-to-earth, relaxed and easy to speak to. I didn’t feel like I was being officially interviewed. I just felt like I was sitting around the dining room table chatting with friends.”

Dahlstrom appreciated Jones’s knowledge of The Furrow’s history and how that made their conversation more engaging and informative.

“Talking to someone with a deep knowledge about what I was talking about was really exciting for me,” Dahlstrom said. “He was incredibly prepared for the interview.”

Gerke said she thinks “On Life & Land” will grow to become quite popular.

“I think podcasting is a wonderful medium for storytelling, especially for a magazine like The Furrow that specializes in telling stories in a beautiful and engaging way,” she said. “I can see it becoming quite popular in the ag community since it’s something that can entertain you during the long hours in a tractor’s cab. I always listen to podcasts when I’m in the tractor or working in the vineyard, as it helps pass the time.”

Dahlstrom noted that, much like The Furrow’s debut in the 1890s, the publication is treading new ground that similar publications haven’t ventured into yet.

“At the end of the day it’s about information,” he said. “If you’re thinking ahead, what you’re looking for is the best way to get information in the fastest way possible. Looking for real information that is reliable. It doesn’t matter what the channel is.”