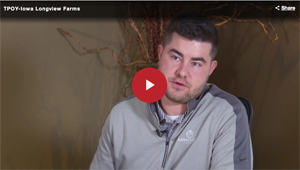 Winter at LongView Farms in Nevada, Iowa is the perfect time for planning next season.

“When I use the word ‘sustainable’, you have to keep your revenues going at least as fast as your expenses are growing,” says Steve Henry, one of the owners and operators of LongView Farms. “So, the definition for sustainability is, can I be here again next year?”

Together with his wife Laurie and sons Scott and Eric, Steve Henry and team have built a sustainable business that now stretches across 10,000 acres and a couple of livestock feeding ventures.

“One of the things I learned through my career before I came back to the farm was the importance of understanding the finances of the farm,” says Steve.

Steve and Laurie came back to operation in 1988 after a short stint working in ag lending in Nebraska.

“It came together for us,” says Laurie Henry.  “We came back. We were excited. It was a way to think about starting a family. I was able to work off the farm as Steve and his dad were starting to work together.”

“Fortunately, my career was in ag lending and I got to see so many different models of success,” says Steve. “I was also able to see things that didn’t necessarily turn out the way that those farmers wanted and it was just an opportunity to grow. We need those kinds of opportunities to grow.”

And growth is what they’ve done. In 2012 the farm was renamed LongView and in 2017 they completed a transition plan adding their sons Scott and Eric as partners.

“It allows Scott and Eric to have more of an impact on the decision making while they’re still in their late 20s, as opposed to waiting until mom and dad die,” says Steve.

“That ownership is key because ultimately, it’s not just something that’s given, says Scott Henry. “It’s something that’s also earned. One of the things that I don’t give my parents a ton of credit for is they’ve always said we want the next generation to feel a part of what we’re doing and that their opinion is valued.”

Today as the operation plans for the future, previous models built on land acquisition are transitioning in search of added value.

“We need to be looking beyond agriculture and how can we be sustainable in a period where Iowa may not always be corn and beans,” adds Laurie.

“I’ve really focused on how can we continue to not only grow in acreage but diversify, and just the business elements of what we’re doing, whether that’s introducing livestock, looking at different partnerships,” says Scott. “We’ve tried indoor farming, for example.”

New areas of leadership are sprouting for both the business and their community.

“When I think about community impact, I don’t think just about what the Henry family does for the community of Nevada or Storey County,” says Scott. “But I also think about what our team members are doing or able to do.  And part of that is making sure that they’re compensated in a way that they feel like they have the capacity to do some of that themselves, as well.”

As the planning continues for 2021 and beyond, the next 5 years are already stacking up to be different.

“Laura and I are no longer the majority owners,” says Steve. “Scott and Eric will have the leadership of it.”

“The mantra of our business, LongView Farms, is honoring the past, stewarding the present and looking to the future,” says Eric.

Congratulations to the Henry family and LongView Farms, the 2021 Top Producer of the Year.