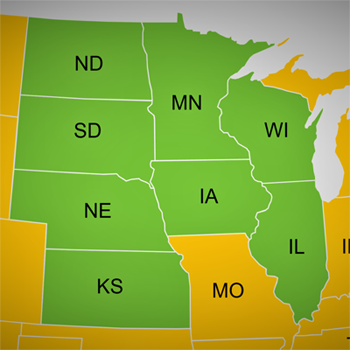 Governors from eight Midwest states notified the U.S. Environmental Protection Agency today that they are taking action to allow the year-round sale of lower-carbon, lower-cost E15 in their states.

The bipartisan group of governors from Iowa, Illinois, Kansas, Minnesota, Nebraska, North Dakota, South Dakota and Wisconsin is exercising the authority granted to them under the Clean Air Act, and the action will result in equality in the regulation of E15 and E10 volatility during the summer months. This would allow retailers and marketers in these eight states to sell E15 unincumbered in 2023 and beyond.

“These governors should be applauded for pursuing a simple regulatory solution that will allow consumers in their states to benefit from E15’s lower cost and lower emissions 365 days a year. Once this notification is approved by EPA, it will mean lower pump prices for drivers in these eight states, lower tailpipe pollution, a more secure energy supply, and a more vibrant rural economy. These states have guided the way forward on E15, and we call on other states and the EPA to follow their lead, so that the benefits of E15 can be permanently enjoyed by drivers across the nation,” said Cooper.

In their letter, the governors thanked EPA for its emergency waiver for E15 this summer and stated more work needs to be done to provide a long-term solution. “While this emergency RVP waiver will deliver economic relief and energy security benefits in the near term, a permanent solution allowing the year-round sale of E15 is also needed for long-term certainty,” they wrote. The governors provided information demonstrating that the action they are seeking will reduce emissions of certain pollutants that can lead to ground-level ozone formation.

Cooper also highlighted recent research from refining sector experts that showed the action sought by the governors would impact gasoline production costs by just 1.5 cents per gallon or less in the Midwest.

These eight states account for more than 10 percent of the nation’s gasoline consumption and are home to: