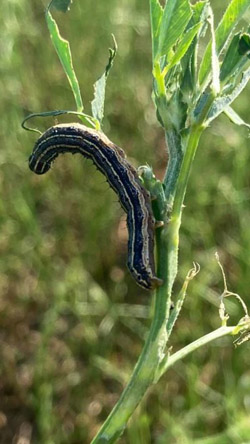 Fall armyworms are on the march, damaging pastures and row crops, the worst outbreak in 30 years.

“They do eat grass, they eat soybean, they eat corn. They eat over sixty plants so they’re sort of like eating machines. In fact, they’re one of the fastest growing animals on Earth.”

And it’s getting harder to stop them, he says, because of their resistance to pyrethroids and alternatives are in short supply. He says growers should scout NOW, “Contact your supply chain for chemicals and get ready to spray. There are some chemicals that are effective.”

Rice says fall army worms have flown in on the jet stream and overwintered in Florida and Texas which both had mild winters. Because it’s dry in most areas, they’re thriving and their natural enemies are not.