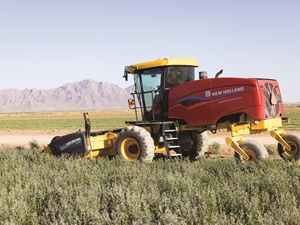 “They are a complete redesign focused on delivering commercial productivity, performance, operator comfort, with new and modern styling. The Speedrower PLUS improvements go beyond the tractor as the Durabine PLUS series disc heads deliver clean cut results at higher in-field speeds. It’s simple – the Speedrower PLUS and Durabine PLUS models are New Holland’s most productive, powerful, precise, and stylish self-propelled windrowers and disc heads,” says Raski.

With the IntelliSteer auto guidance, farmers can cut more acres per hour with field speeds up to 20 mph. It is the ultimate guidance solution offering complete machine direction control with the push of a button. While using Intellisteer Auto Guidance, Speedrower PLUS models are 30 percent faster in the field than prior models. Farmers can also maximize capacity with the IntelliCruise with ground
speed automation and engine power-load management. IntelliCruise has two systems, Field Cruise- ECO Power Mode and Power Cruise Mode.

The power of the machine does not take a backseat to productivity and precision. SensiDrive also delivers a maximum wheel torque of 11,000 ft. lbs. for when farmers need it most, making an easy task of climbing steep grades or crossing ditches. And with a range of 150 to 250 horsepower, the Speedrower PLUS is capable of any job delivering greater field speeds and more header power.

Productivity improvements do not stop with a faster and more precise windrowing tractor. The Durabine PLUS Series disc heads deliver a cleaner cut and improved swathing for faster crop dry down. Combining a Speedrower PLUS model with a Durabine PLUS disc head allows farmers to work at a higher speed with a better cut ensuring smooth crop flow in the operation.

The DuraMerger 419 PLUS merging attachment also delivers performance without compromise saving time, fuel, and harvesting labor. The long deck design combines up to three windrows improving forage harvesting efficiency for the greatest return on investment. The high-speed belt and robust, direct motor drive assembly gives the DuraMerger 419 PLUS the power to push through the heaviest crops.

The Speedrower PLUS Series is a part of the new generation of red and yellow equipment at New Holland. A new yellow paint scheme not only reflects New Holland’s heritage, but also provides greater visibility from an operational, service, and safety perspective. Despite the cosmetic change, one thing that hasn’t changed is New Holland’s leadership in hay and forage and our passion for innovation and making the farmer’s job easier, more efficient, and more profitable.

The Speedrower PLUS Windrower will be on display at the Farm Progress Show on August 31st in Decatur, Illinois.