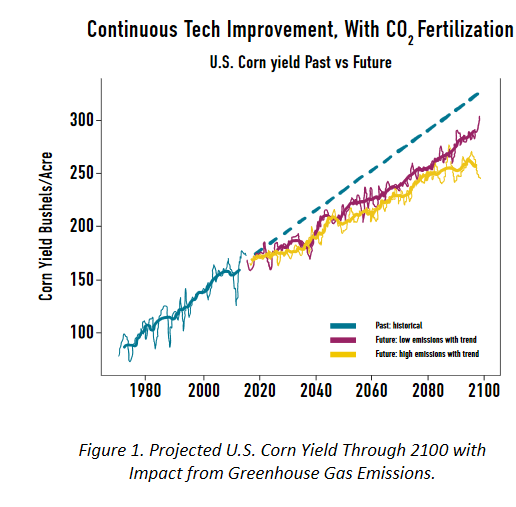 A new report commissioned by Farm Journal Foundation found that U.S. farmers have the potential to significantly reduce their greenhouse gas emissions and become part of the global solution to climate change.

U.S. agriculture contributes about 10% of the total greenhouse gas emissions of the entire national economy, but farmers could greatly reduce those emissions if they were provided with the right government incentives, according to the report, which was co-authored by Dr. John Reilly of MIT’s Joint Program on the Science and Policy of Global Change and Dr. Stephanie Mercier, senior policy adviser at Farm Journal Foundation.

“Farmers are already feeling the effects of climate change, with U.S. growing areas experiencing a series of droughts, floods, and other extreme weather events in recent years,” Reilly said. “These conditions are only expected to intensify. The U.S. should develop and expand programs that help farmers prepare for the challenges that lie ahead, and enable them to make investments to mitigate future climate change.”

A number of government programs already provide impactful financial and technical assistance for conservation, such as USDA’s Environmental Quality Incentives Program (EQIP) and Conservation Stewardship Program (CSP). However there is more demand for assistance than can be met under existing funding levels. For example, between 2000 and 2010, only about 40% of projects proposed under the EQIP program were actually funded, and farmers submitting requests for technical assistance often face long waiting periods.

Increasing the funding for government programs and enabling more farmers to participate would go a long way toward making the agricultural industry more sustainable. With the right incentives in place, the U.S. farming sector could ultimately become a net carbon sink – meaning that it would absorb more carbon dioxide from the atmosphere than it releases.

To help the industry become carbon positive, farmers could capture more carbon in their soils, increase the efficiency of nitrogen fertilizer applications (which can lower emissions of nitrous oxide), and harvest biomass to produce clean fuels. Large and medium-scale livestock operations could also contribute by installing methane digesters on their farms, which are machines that collect animal waste and convert it into natural gas. According to the report, there is enough manure produced in the U.S. each year to generate methane that could supply an estimated 10% of the country’s electricity needs.

Increased government investment in agricultural research could help deliver even more solutions, according to the report. For example, methane released by livestock during the digestive process is a major contributor of greenhouse gas emissions, but one recent discovery found that under experimental conditions, particular types of seaweed added to livestock diets can almost completely eliminate methane emissions from those animals. Breakthrough research such as this will be critical if the industry is to become “carbon positive.”

“There is no shortage of solutions to help the U.S. agricultural industry fight climate change, but farmers need support to put these solutions into practice,” Mercier said. “Broadening access to government incentives and increased public investment in agricultural research will be crucial for the industry to become a sustainability success story.”